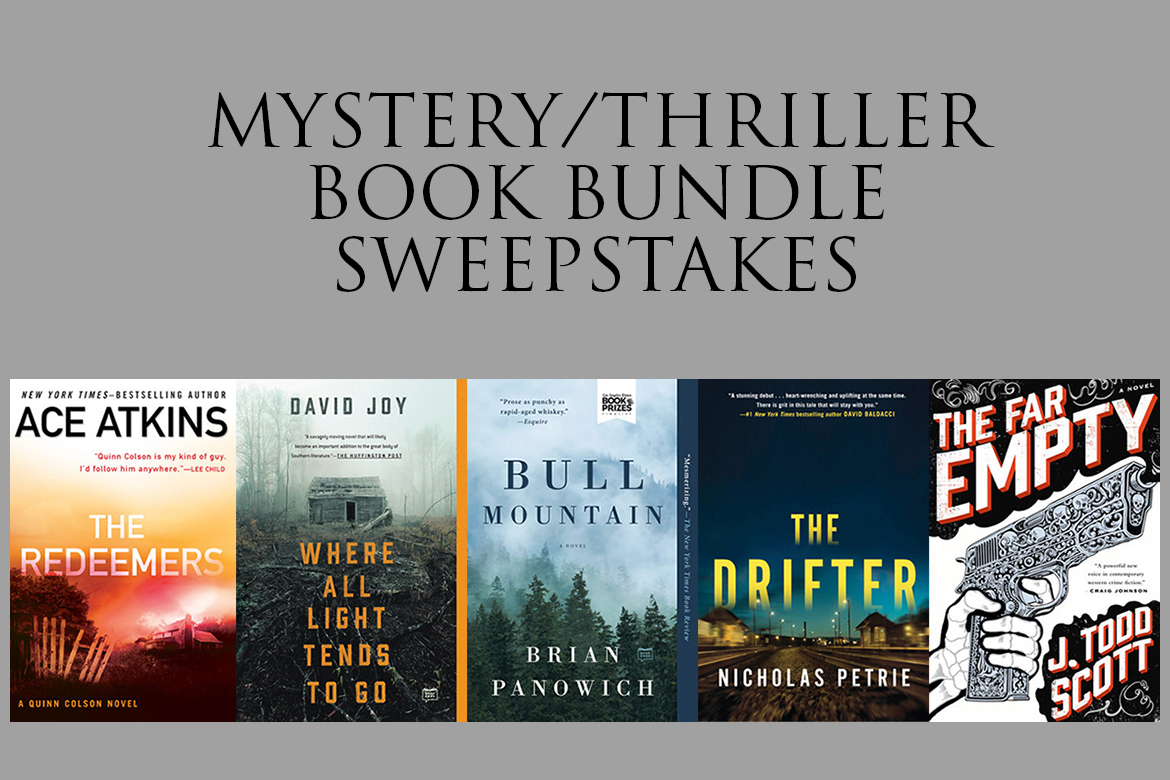 The Redeemers by Ace Atkins
The extraordinary new novel in the New York Times–bestselling author’s acclaimed series about the real Deep South—“a joy ride into the heart of darkness.” —The Washington Post

Quinn Colson is jobless—voted out of his position as sheriff of Tibbehah County, Mississippi. But in the middle of the long, hot summer, somebody smashes through the house of a wealthy mill owner, making off with a safe full of money and shooting a deputy. As Deputy Lillie Virgil hunts the criminals and draws Colson in, other people join the chase, too, but with a much more personal motive. For that safe contained more than just money—it held secrets. And as Colson well knows, secrets can kill.

“Remarkable . . . This isn’t your ordinary coming-of-age novel, but with his bone-cutting insights into these men and the region that bred them, Joy makes it an extraordinarily intimate experience.”—Marilyn Stasio,The New York Times Book Review

The area surrounding Cashiers, North Carolina, is home to people of all kinds, but the world that Jacob McNeely lives in is crueler than most. His father runs a methodically organized meth ring, with local authorities on the dime to turn a blind eye to his dealings. Having dropped out of high school and cut himself off from his peers, Jacob has been working for this father for years, all on the promise that his payday will come eventually.  The only joy he finds comes from reuniting with Maggie, his first love, and a girl clearly bound for bigger and better things than their hardscrabble town. Jacob has always been resigned to play the cards that were dealt him, but when a fatal mistake changes everything, he’s faced with a choice: stay and appease his father, or leave the mountains with the girl he loves. In a place where blood is thicker than water and hope takes a back seat to fate, Jacob wonders if he can muster the strength to rise above the only life he’s ever known.

Bull Mountain by Brian Panowich
From a remarkable new voice in Southern fiction, a multigenerational saga of crime, family, and vengeance.

Clayton Burroughs comes from a long line of outlaws.  For generations, the Burroughs clan has made its home on Bull Mountain in North Georgia, running shine, pot, and meth over six state lines, virtually untouched by the rule of law. To distance himself from his family’s criminal empire, Clayton took the job of sheriff in a neighboring community to keep what peace he can.  But when a federal agent with the Bureau of Alcohol, Tobacco, and Firearms shows up at Clayton’s office with a plan to shut down the mountain, his hidden agenda will pit brother against brother, test loyalties, and could lead Clayton down a path to self-destruction. In a sweeping narrative spanning decades and told from alternating points of view, the novel brilliantly evokes the atmosphere of the mountain and its inhabitants: forbidding, loyal, gritty, and ruthless. A story of family—the lengths men will go to protect it, honor it, or in some cases destroy it—Bull Mountain is an incredibly assured debut that heralds a major new talent in fiction.

The Drifter by Nicholas Petrie
An explosive thriller debut introducing Peter Ash, a veteran who finds that the demons of war aren’t easily left behind . . .

Peter Ash came home from the wars in Iraq and Afghanistan with only one souvenir: what he calls his “white static,” the buzzing claustrophobia due to post-traumatic stress that has driven him to spend a year roaming in nature, sleeping under the stars. But when a friend from the Marines commits suicide, Ash returns to civilization to help the man’s widow with some home repairs. Under her dilapidated porch, he finds more than he bargained for: the largest, ugliest, meanest dog he’s ever encountered . . . and a Samsonite suitcase stuffed with cash and explosives. As Ash begins to investigate this unexpected discovery, he finds himself at the center of a plot that is far larger than he could have imagined . . . and it may lead straight back to the world he thought he’d left for good. Suspenseful and thrilling, and featuring a compelling new hero, The Drifter is an exciting debut from a fresh voice in crime fiction.

The Far Empty by J. Todd Scott
“J. Todd Scott’s The Far Empty is so good I wish I’d written it. The poetic and bloody ground of west Texas has given birth to a powerful new voice in contemporary western crime fiction.” —Craig Johnson, New York Times–bestselling author of the Walt Longmire series

In this gritty crime debut set in the stark Texas borderlands, an unearthed skeleton will throw a small town into violent turmoil. Seventeen-year-old Caleb Ross is adrift in the wake of the sudden disappearance of his mother more than a year ago, and is struggling to find his way out of the small Texas border town of Murfee. Chris Cherry is a newly minted sheriff’s deputy, a high school football hero who has reluctantly returned to his hometown. When skeletal remains are discovered in the surrounding badlands, the two are inexorably drawn together as their efforts to uncover Murfee’s darkest secrets lead them to the same terrifying suspect: Caleb’s father and Chris’s boss, the charismatic and feared Sheriff Standford “Judge” Ross. Dark, elegiac, and violent, The Far Empty is a modern Western, a story of loss and escape set along the sharp edge of the Texas border. Told by a longtime federal agent who knows the region, it’s a debut novel you won’t soon forget.

Starred Reviews for your TBR Pile!