8 Books That Will Take You Away Summer road trips and quick weekend getaways may be coming to an end, but your travel doesn’t have to. These eight reads will take you to destinations known and unknown. So, whether it’s Paris, Spain, or Fiji—consider your reservations booked!

I prefer to travel with an air of mystery . . . 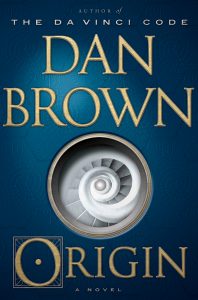 The stunningly inventive new novel from the bestselling author of The Da Vinci Code.

Bilbao, Spain: Robert Langdon arrives at the Guggenheim Museum Bilbao to attend a major announcement—the unveiling of a discovery that “will change the face of science forever.” Edmond Kirsch, a forty-year-old billionaire and futurist, is about to reveal an astonishing breakthrough.

But the evening suddenly erupts into chaos, and Kirsch’s precious discovery teeters on the brink of being lost forever. Reeling and facing an imminent threat, Langdon is forced into a desperate bid to escape Bilbao and flee to Barcelona on a perilous quest to locate a cryptic password that will unlock Kirsch’s secret. 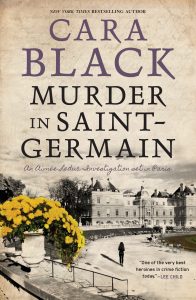 Murder in Saint-Germain by Cara Black

Paris, July 1999: P.I. Aimée Leduc is taking a walk when she is accosted by Suzanne Lesage, a Brigade Criminelle agent on an elite counterterrorism squad. Convinced she’s being stalked by a ghost—Suzanne begs Aimée to investigate.

Aimée chases the few leads she has. It seems that Suzanne is, in fact, paranoid, perhaps losing her mind—until Suzanne’s team begins to die in a series of strange, tragic accidents. Are these just coincidences? Or are things not what they seem?

“The abiding pleasure of this series is the chance to ride with a cabdriver who wants to discuss Sartre or just tearing around Paris on Aimée’s pink Vespa.” —Marilyn Stasio, The New York Times Book Review 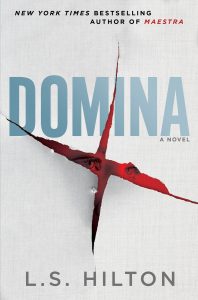 In this riveting sequel to the instant New York Times bestseller, Maestra, femme fatale Judith Rashleigh once again leads readers into the mesmerizing and dangerous underworld of Europe’s glamorous elite.

Since opening her own art gallery in Venice, Judith Rashleigh—now Elisabeth Teerlinc—can finally stop running. But when a chance encounter in Ibiza leads to a corpse that is, for once, not her own doing, she finds her life is back on the line.

From St. Moritz to Serbia, Judith again finds herself maneuvering the strange landscapes of wealth, but this time there’s far more than her reputation at stake. How far will Rage take Judith? Far enough to escape death?

I pack for travel with a stash of chocolate . . . 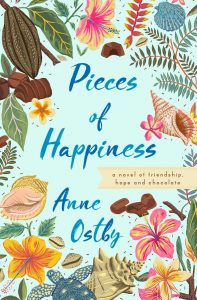 Pieces of Happiness by Anne Ostby

“I’ve planted my feet on Fijian earth and I intend to stay here until the last sunset. Why don’t you join me?:

When Sina, Maya, Ingrid, and Lisbeth each receive a letter in the mail posing the same question, the answer is obvious. Their old high school friend Kat has extended the invitation of a lifetime: Come live with me on my cocoa farm in Fiji. Come spend the days eating chocolate and gabbing like teenagers once again, free from men, worries, and cold. Who could say no?

Now in their sixties, the friends adjust to their new lives in Fiji together. Surrounded by an azure-blue ocean, cocoa trees, and a local culture that is fascinatingly, joyfully alien, the friends find a new purpose in starting a business making chocolate: bittersweet, succulent pieces of happiness. 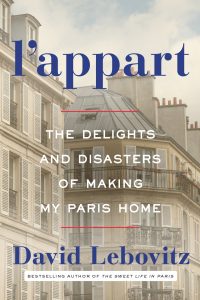 L’Appart: The Delights and Disasters of Making My Paris Home by David Lebovitz

Bestselling author and world-renowned chef David Lebovitz continues to mine the rich subject of his evolving ex-Pat life in Paris, using his perplexing experiences in apartment renovation as a launching point for stories about French culture, food, and what it means to revamp one’s life.

Lebovitz maintains his distinctive sense of humor with the help of his partner Romain, peppering this renovation story with recipes from his Paris kitchen. In the midst of it all, he reveals the adventure that accompanies carving out a place for yourself in a foreign country—under baffling conditions—while never losing sight of the magic that inspired him to move to the City of Light many years ago, and to truly make his home there. 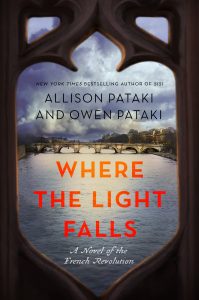 Where the Light Falls by Allison Pataki and Owen Pataki

Three years after the storming of the Bastille, the streets of Paris are roiling with revolution.  The citizens of France are enlivened by the ideals of liberty, equality, and fraternity. Jean-Luc, an idealistic young lawyer, moves his wife and their infant son from a comfortable life in Marseille to Paris, in the hopes of joining the cause. André, the son of a denounced nobleman, has evaded execution by joining the new French army. Sophie, a young aristocratic widow, embarks on her own fight for independence against her powerful, vindictive uncle.

As chaos threatens to undo the progress of the Revolution and the demand for justice breeds instability and paranoia, the lives of these compatriots become inextricably linked.

Featuring cameos from legendary figures such as Robespierre, Louis XVI, and Thomas-Alexandre Dumas, Where the Light Falls is an epic and engrossing novel with vivid detail and imagery, that captures the hearts and minds of the citizens of France fighting for truth above all, and for their belief in a cause greater than themselves.

I dive into travel with a zest for the unknown . . . 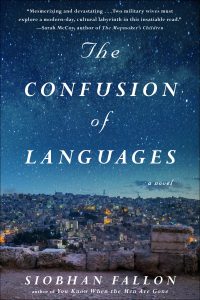 The Confusion of Languages by Siobhan Fallon

Both Cassie Hugo and Margaret Brickshaw dutifully followed their soldier husbands to the U.S. embassy in Jordan, but that’s about all the two women have in common. So, when a fender-bender sends Margaret to the local police station, Cassie reluctantly agrees to watch Margaret’s toddler son. But as the hours pass, Cassie’s boredom and frustration turn to fear: Why isn’t Margaret answering her phone, and why is it taking so long to sort out a routine accident? Cassie begins to question not only her friend’s whereabouts but also her own role in Margaret’s disappearance.

“Touching. . . . A moving work about desire and the dislo­cation one might experience in a foreign land.” —BookPage 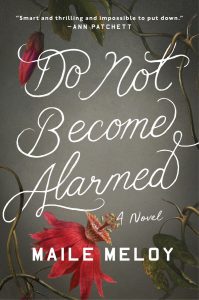 Do Not Become Alarmed by Maile Meloy

When Liv and Nora decide to take their husbands and children on a holiday cruise, everyone is thrilled. But when they all go ashore for an adventure in Central America, a series of minor misfortunes and miscalculations leads the families farther from the safety of the ship. One minute the children are there, and the next they’re gone.

The parents, accustomed to security and control, turn on each other and blame themselves, while the seemingly helpless children discover resources they never knew they possessed.

“Meloy is such a deft writer that she keeps the adventure plot whizzing along even as she deepens our sense of the characters and the unfamiliar culture they have to navigate.” —Fresh Air, NPR

Celestial Reads for the Solar Eclipse 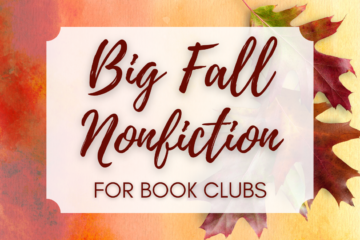