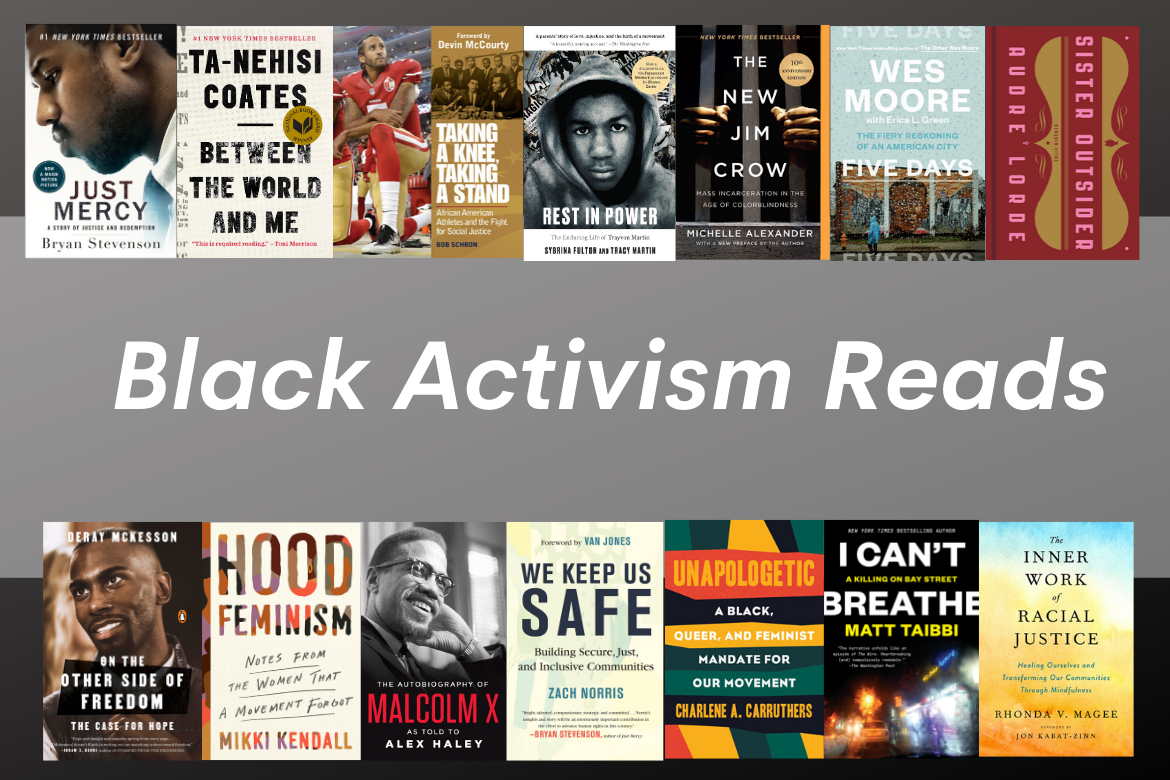 We stand against racism and violence toward the Black community. And we commit to listening—to our readers, our authors, and to our teams—as we work toward becoming part of the change.

This list of books about black activism celebrates notable African Americans who have changed, and continue to change, the culture and politics of the United States. This list is not exhaustive, but it’s a place to start. 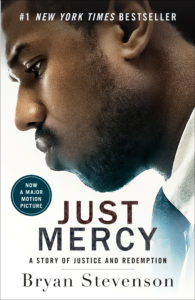 Just Mercy: A Story of Justice and Redemption by Bryan Stevenson

A powerful true story about the potential for mercy to redeem us, and a clarion call to fix our broken system of justice—from one of the most brilliant and influential lawyers of our time.

“[Bryan Stevenson’s] dedication to fighting for justice and equality has inspired me and many others and made a lasting impact on our country.”—John Legend

Click to Watch the Movie Trailer Just Mercy.
(Free to stream through June 2020.) 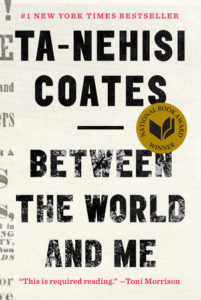 Between the World and Me by Ta-Nehisi Coates

A thrillingly illuminating new framework for understanding race: its history, our contemporary dilemma, and where we go from here.

“I’ve been wondering who might fill the intellectual void that plagued me after James Baldwin died. Clearly it is Ta-Nehisi Coates. The language of Between the World and Me, like Coates’s journey, is visceral, eloquent, and beautifully redemptive. And its examination of the hazards and hopes of black male life is as profound as it is revelatory. This is required reading.”—Toni Morrison

Listen to a Clip from an Audiobook. 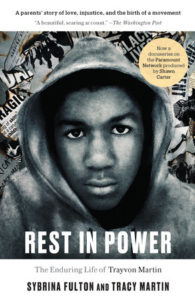 Rest in Power: The Enduring Life of Trayvon Martin by Sybrina Fulton and Tracy Martin

Trayvon Martin’s parents take readers beyond the news cycle with an account only they could give: the intimate story of a tragically foreshortened life and the rise of a movement.

“Not since Emmitt Till has a parent’s love for a murdered child moved the nation to search its soul about racial injustice and inequality. Sybrina Fulton and Tracy Martin’s extraordinary witness, indomitable spirit and unwavering demand for change have altered the dynamics of racial justice discourse in this country.  This powerful book illuminates the witness, the grief, and the commitment to reform that Trayvon Martin’s death has mobilized; it is a story fueled by a demand for justice but rooted in love.”—Bryan Stevenson, author of Just Mercy 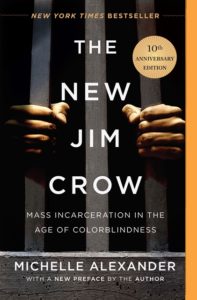 The New Jim Crow: Mass Incarceration in the Age of Colorblindness by Michelle Alexander

Since first being published in 2010, The New Jim Crow has been cited in judicial decisions and has been adopted in campus-wide and community-wide reads; it helped inspire the creation of the Marshall Project and the new $100 million Art for Justice Fund; it has been the winner of numerous prizes, including the prestigious NAACP Image Award; and it has spent nearly 250 weeks on the New York Times bestseller list.

“It is in no small part thanks to Alexander’s account that civil rights organizations such as Black Lives Matter have focused so much of their energy on the criminal justice system.” —Adam Shatz, London Review of Books 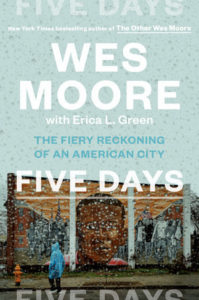 Five Days: The Fiery Reckoning of an American City by Wes Moore

From the New York Times bestselling author of The Other Wes Moore, a kaleidoscopic account of five days in the life of a city on the edge, told through eight characters on the front lines of the uprising that overtook Baltimore and riveted the world.

“Moore captures the fear, anger, uncertainty, and hope of locals who saw their city fall apart and struggle to come back together. . . . Moore provides important context in the history of Baltimore’s racial and income inequality and the emergence of the Black Lives Matter movement. Readers will be enthralled by this propulsive account.”—Publishers Weekly 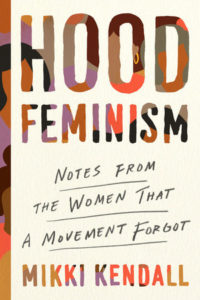 Hood Feminism: Notes from the Women That a Movement Forgot by Mikki Kendall

“Kendall is a highly knowledgeable and inspiring guide, and she effectively builds on the work of black women who have, for ages, been working to better the lives of themselves and their communities . . . A much-needed addition to feminist discourse.”—Kirkus Reviews 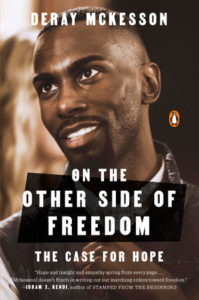 On the Other Side of Freedom: The Case for Hope by DeRay Mcesson

From the internationally recognized civil rights activist/organizer and host of the podcast Pod Save the People, a meditation on resistance, justice, and freedom, and an intimate portrait of a movement from the front lines.

“By turns lyrical reflection and practical handbook, On the Other Side of Freedom reveals the mind and motivations of a young man who has risen to the fore of millennial activism through study, discipline, and conviction. His belief in a world that can be made better, one act at a time, powers his narratives and opens up a view on the costs, consequences, and rewards of leading a movement.”—Henry Louis Gates, Jr. 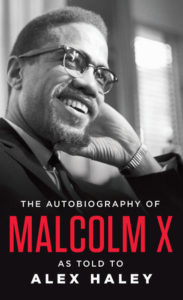 The Autobiography of Malcom X by Malcom X

This book stands as the definitive statement of a movement and a man whose work was never completed but whose message is timeless. It is essential reading for anyone who wants to understand America.

“Malcolm X’s autobiography seemed to offer something different. His repeated acts of self-creation spoke to me; the blunt poetry of his words, his unadorned insistence on respect, promised a new and uncompromising order, martial in its discipline, forged through sheer force of will.”—Barack Obama, Dreams from My Father 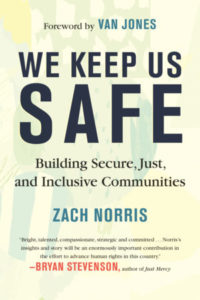 We Keep Us Safe: Building Secure, Just, and Inclusive Communities by Zach Norris

A groundbreaking new vision for public safety that overturns more than 200 years of fear-based discrimination, othering, and punishment.

“Bright, talented, compassionate, strategic, and committed . . . Norris’s insights and story will be an enormously important contribution in the effort to advance human rights in this country.”—Bryan Stevenson, author of Just Mercy 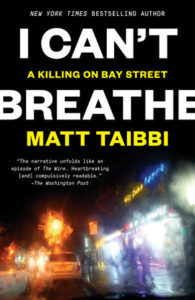 I Can’t Breathe: A Killing on Bay Street by Matt Taibbi

A work of riveting literary journalism that explores the roots and repercussions of the infamous killing of Eric Garner by the New York City police—from the bestselling author of The Divide.

“Brilliant . . . Taibbi is unsparing is his excoriation of the system, police, and courts . . . This is a necessary and riveting work.”—Booklist, starred review 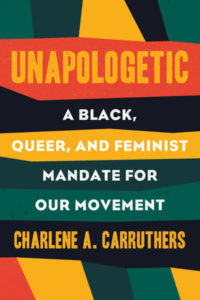 Unapologetic: A Black, Queer, and Feminist Mandate for Our Movement by Charlene A. Curruthers

A manifesto from one of America’s most influential activists which disrupts political, economic, and social norms by reimagining the Black Radical Tradition.

“Timely and important, Carruthers’ book is a strong testament to the resilience of the radical black liberation movement as well as an impassioned appeal to continue the fight for social justice in a political environment characterized by increasing hostility to equality and difference. Powerful, potent reading.”—Kirkus Reviews 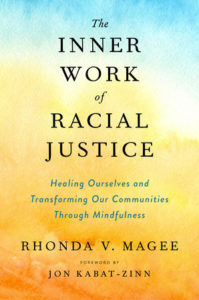 The Inner Work of Racial Justice: Healing Ourselves and Transforming Our Communities Through Mindfulness by Rhonda V. Magee

It is only by healing from injustices and dissolving our personal barriers to connection that we develop the ability to view others with compassion and to live in community with people of vastly different backgrounds and viewpoints. Incorporating mindfulness exercises, research, and Magee’s hard-won insights, The Inner Work of Racial Justice offers a road map to a more peaceful world.

“Illuminates the very heart of social justice and how it might be approached and nurtured through mindfulness practices in community and through the discernment and new degrees of freedom these practices entrain.” —from the foreword by Jon Kabat-Zinn 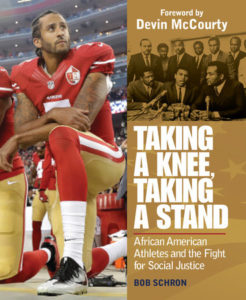 Taking a Knee, Taking a Stand: African American Athletes and the Fight for Social Justice by Bob Schron

A history of the activism and achievement of African American athletes from Jesse Owens to Serena Williams to Colin Kaepernick, who advanced the cause of social justice through their outspokenness, commitment, and integrity.

“When NFL quarterback Colin Kaepernick knelt in protest during the national anthem, he set off a firestorm of yays and nays that still burns. He also reminded us of the long and honorable tradition of athlete-activists in the African American community, captured here by veteran sports writer Schron in a crisp, impassioned narrative that moves from the quiet heroism of Jesse Owens and Joe Louis through Jackie Robinson, Muhammad Ali, and Olympic black power salutes to the Williams Sisters. Not just for sports fans; this is important history.”—Library Journal 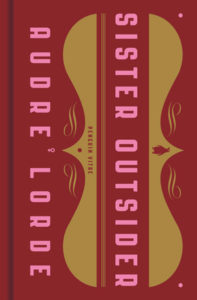 “Sister Outsider‘s teachings, by one of our most revered elder stateswomen, should be read by everyone.” —Essence 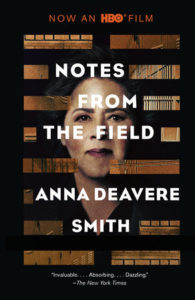 Notes from the Field by Anna Deavere Smith

Anna Deavere Smith’s extraordinary form of documentary theater shines a light on injustices by portraying the real-life people who have experienced them. Their voices bear powerful witness to a great iniquity of our time—and call us to action with their accounts of resistance and hope.

“Anna Deavere Smith has created one of her most ambitious and powerful works on how matters of race continue to divide and enslave the nation.”—Variety

Click for More Anti-Racist Books and Resources for Our Readers.

Explore the World from the Comfort of Your Own Home