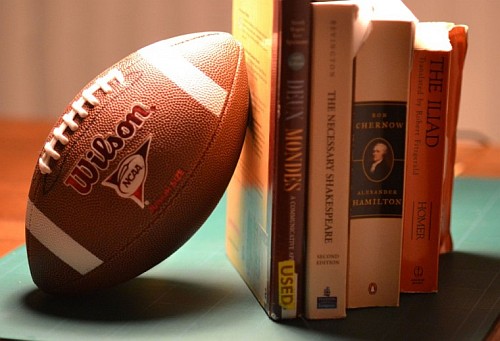 Football season is in full swing and we’ve got some great titles to both further immerse yourself in touchdown passes and victory dances and educate you about the health ramifications of this sport.

Brady vs Manning: The Untold Story of the Rivalry That Transformed the NFL
by Gary Myers
In this extraordinary book, veteran NFL correspondent Gary Myers tackles this subject from every angle and with unprecedented access and insight, drawing on a huge number of never-before-heard interviews with Brady and Manning, their coaches, their families, and those who have played with them and against them. The result is a remarkable collection of the most entertaining and revealing stories ever told about Peyton and Tom, from how they developed their vastly different leadership styles, to the unlikely friendship they’ve built over the years, to their respective exploits as locker room pranksters.

The Last Season: A Father, a Son, and a Lifetime of College Football
by Stuart Stevens
Fathers, sons, and sports are enduring themes of American literature. Here, in this fresh and moving account, a son returns to his native South to spend a special autumn with his ninety-five-year-old dad, sharing the unique joys, disappointments, and life lessons of Saturdays with their beloved Ole Miss Rebels.

Concussion
by Jeanne Marie Laskas
Soon to be a major motion picture of the same name starring Will Smith—Sony’s big Christmas day release. The riveting, unlikely story of the pathologist who made one of the most significant medical discoveries of the 21st century—a discovery that challenges the existence of America’s favorite sport, and puts him in the crosshairs of its most powerful corporation: the NFL.

Against Football: One Fan’s Reluctant Manifesto
by Steve Almond
In Against Football, Steve Almond details why, after forty years as a fan, he can no longer watch the game he still loves. Using a synthesis of memoir, reportage, and cultural critique, Almond asks a series of provocative questions.