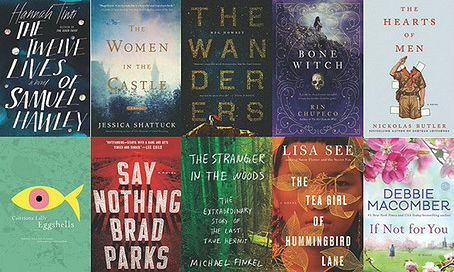 Public library staff across the nation have spoken! Congratulations to all the books selected for the March 2017 LibraryReads Top Ten List!
Scroll down to enter our bonus LibraryReads giveaway.

The Twelve Lives of Samuel Hawley: A Novel (#1)
By Hannah Tinti
“Meet Samuel Hawley, a man in a constant struggle with his violent past, doing the best he can to raise his daughter.  Meet Loo, his daughter, a girl with an obscure past and an uncertain future, on the cusp of adulthood.  And meet Lily, the dead woman who connects them both. In this finely woven novel, the past and the present gradually illuminate the story of a man’s life through the bullet wounds he carries with him and makes readers consider what it is to be both good and evil.” —Dawn Terrizzi, Denton Public Library, Denton, TX

The Women in the Castle: A Novel (#2)
by Jessica Shattuck
“Three German women’s lives are abruptly changed when their husbands are executed for their part in an attempt to assassinate Hitler. They band together in a crumbling estate to raise their children and keep each other standing. Rich in character development, this book is narrated by each of the women, giving us a clear understanding of their sense of loss, inner strength and the love they have for each other. This story examines the human side of war, where the lines are blurred between hero and victim.”—Kimberly McGee, Lake Travis Community Library, Austin, TX

The Wanderers: A Novel  (#3)
By Meg Howrey
“A private space exploration company is mounting a manned mission to Mars. To prepare for the actual event, the company plans an elaborate training program to match the conditions and potential problems the team might face. The ordeal, though simulated, is no less dramatic for the astronauts, their families, and the crew. The lines cross between fiction and reality and none of the participants is left unchanged. Part literary fiction, part sci-fi, all amazing.” —Marie Byars, Sno-Isle Libraries, Oak Harbor, WA

The Bone Witch (#4)
by Rin Chupeco
“Fifteen-year-old Tea discovers that she has a power that sets her apart from the other witches in her village and will incur their hatred. She is a “bone witch” who can raise the dead. Aware that a darkness is coming, Tea agrees to leave her home and family so she can learn to save the very people who hate her. Her training, outlined in rich and fascinating detail, includes the courtly arts of singing and dancing, as well as classes in fighting. Told in short chapters, Tea reflects on her life, revealing how she becomes a courageous warrior. Although written for young adults, this will equally appeal to adults. The cliff-hanger ending will make readers eager for the promised sequel.”—Trisha Perry, Oldham County Public Library, Lagrange, KY

The Hearts of Men (#5)
by Nickolas Butler“In the summer of 1962, we are introduced to popular Jonathan and social outcast, Nelson, aka ‘The Bugler.’ The only thing the two seem to have in common is that they both spend a few weeks of one summer at Camp Chippewa in the woods of Wisconsin. Yet, over the course of decades, their lives and the lives of those they love the fiercest are intertwined.  This wonderful novel peels back the layers of male friendship and shows what loyalty, compassion, and selflessness looks like.”—Jennifer Dayton, Darien Library, Darien CT

Eggshells (#6)
By Caitriona Lally
“Whimsical and different, this novel’s humor hooked me.  Vivian is an eccentric, living in Dublin and searching for a place where she can feel she belongs. How can you help but love a character who checks every wardrobe for Narnia and every yellow road for an Emerald City?  This novel movingly explores the outcasts and the different among us, showing that they are only hoping to fit in and find a friend.” —Linda Quinn, Fairfield Public Library, Fairfield, CT

Say Nothing: A Novel  (#7)
By Brad Park
“Fans of crime fiction and fans of domestic drama will find much to love in Parks’ genre-blending thriller. Judge Scott Sampson is a devoted family man and a respected jurist thrown into every parent’s worst nightmare: his 6-year-old twins are kidnapped, and the kidnappers blackmail Scott into increasingly immoral legal decisions. Cue marital meltdown, ethical dilemmas, paranoia, and a thrill ride that suspense lovers will race through to learn what happens next. It’s a departure from the author’s lightly snarky Carter Ross series, but a welcome one for readers of Harlan Coben and Gregg Hurwitz.” —Donna Matturri, Pickertington Public Library, Pickerington, OH

The Stranger in the Woods: The Extraordinary Story of the Last True Hermit (#8)
By Michael Finkel
“There are three types of hermits in the world, according to Finkel: protesters, pilgrims, and pursuers. But Christopher Knight doesn’t seem to fit any of these categories. So why, at the age of 20, did he drive into a forest in Maine and disappear for 27 years, his only human interaction a single ‘hi’ with a passing hiker? This book uses the incredible but true story of Knight, ‘the last true hermit,’ to explore themes of solitude, introversion and the meaning of life.” —Megan Tristao, San Jose Public Library, San Jose, CA

The Tea Girl of Hummingbird Lane (#9)
by Lisa See
“Li-Yan and her family, devote their lives to farming tea. Like her mother, Li-Yan is being groomed to become a midwife in her Chinese village. She yearns for more and is allowed to pursue her schooling. The arrival of outsiders seeking the Pu’er tea of Yunnan brings the modern world into this isolated village. When Li-Yan finds herself alone and pregnant, she leaves her child, wrapped with a tea cake, at an orphanage. Her daughter is adopted by a couple from California, but she is drawn to the study of tea. A sweeping historical novel that juxtaposes ancient China with its modern incarnation.”—Catherine Coyne, Mansfield Public Library, Mansfield, MA

By Debbie Macomber
“High school music teacher, Beth, and tattooed auto mechanic, Sam, are set up by mutual friends, but neither sees a relationship developing. Their mutual disinterest quickly turns into friendship and then develops into much more. Just as their romantic relationship truly begins, Beth’s controlling mother and Sam’s hidden past get in the way and threaten to break them apart. As fans have grown to expect from Macomber, this tale tugs the heartstrings in every direction but is ultimately uplifting. It’s impossible not to fall in love with her characters.” —Jenna Friebel, Oak Park Public Library, Oak Park, IL

For more information about the program visit LibraryReads.org.

Enter for your chance to win advanced copies of recent LibraryReads-winning titles!

INTO THE WATER Giveaway