Celebrate All Kinds of Love with These Valentine’s Day Reads 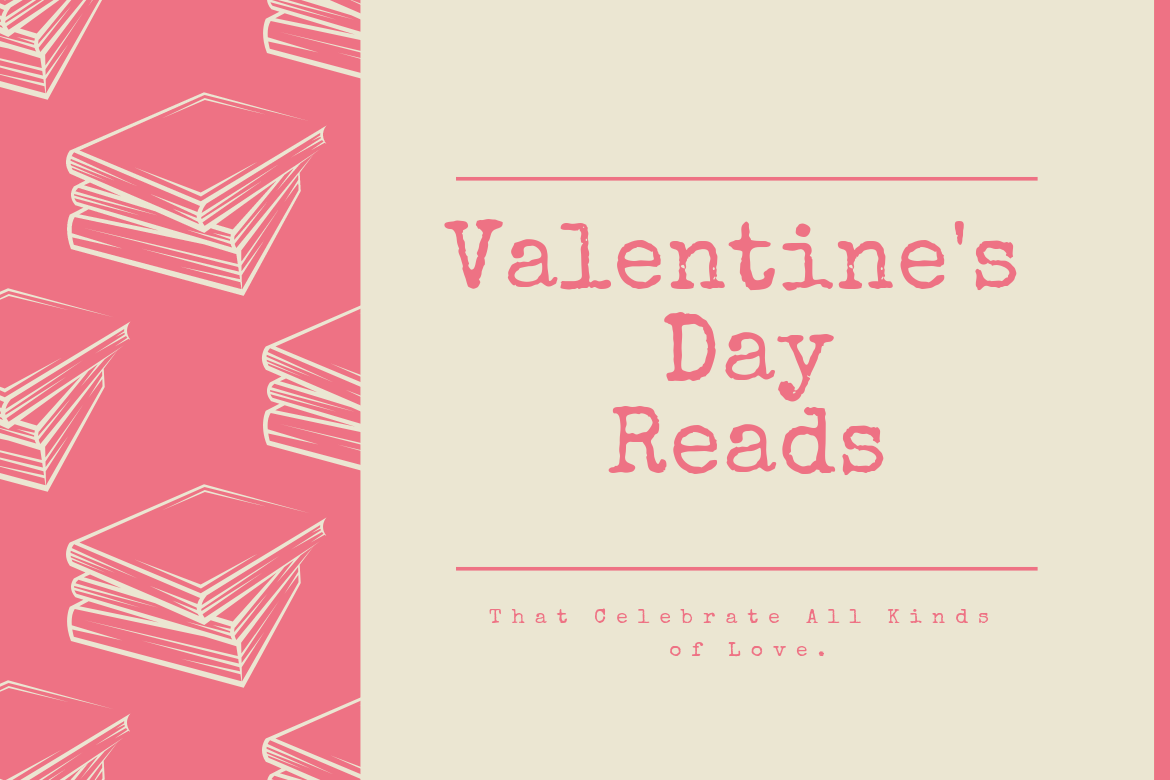 Can you feel the love tonight? Whether you’ve been shot by Cupid’s arrow or want to celebrate those close guy or gal friends in your life, these reads are perfect for Valentine’s Day. 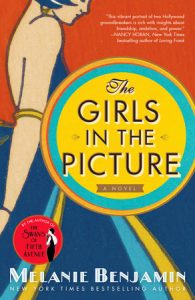 From the New York Times bestselling author of The Swans of Fifth Avenue and The Aviator’s Wife comes a story of friendship and forgiveness that brilliantly captures the dawn of a glittering new era—its myths and icons, its possibilities and potential, and its seduction and heartbreak.

“Benjamin immerses readers in the whirlwind excitement of Mary’s and Frances’ lives while portraying a rarely seen character, an early woman screenwriter, and deftly exploring the complexities of female friendship.”—Booklist 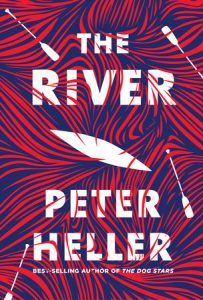 The River by Peter Heller

From the bestselling author of The Dog Stars, the story of two college students on a wilderness canoe trip—a gripping tale of a friendship tested by fire, white water, and violence.

Wynn and Jack have been best friends since freshman orientation, bonded by their shared love of mountains, books, and fishing. Wynn is a gentle giant, a Vermont kid never happier than when his feet are in the water. Jack is more rugged, raised on a ranch in Colorado where sleeping under the stars and cooking on a fire came as naturally to him as breathing. When they decide to canoe the Maskwa River in northern Canada, they anticipate long days of leisurely paddling and picking blueberries, and nights of stargazing and reading paperback Westerns. But a wildfire making its way across the forest adds unexpected urgency to the journey. From this charged beginning, master storyteller Peter Heller unspools a headlong, heart-pounding story of desperate wilderness survival. 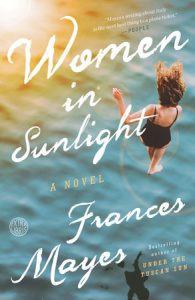 Women in Sunlight by Frances Mayes

From the bestselling author of Under the Tuscan Sun, comes the story of four American strangers who bond in Italy and change their lives over the course of an exceptional year.

Kit Raine, an American writer living in Tuscany, is working on a biography of her close friend, a complex woman who continues to cast a shadow on Kit’s own life. Her work is waylaid by the arrival of three women—Julia, Camille, and Susan—all of whom have launched a recent and spontaneous friendship that will uproot them completely and redirect their lives. Susan, the most adventurous of the three, has enticed them to subvert expectations of staid retirement by taking a lease on a big, beautiful house in Tuscany. Though novices in a foreign culture, their renewed sense of adventure imbues each of them with a bright sense of bravery, a gusto for life, and a fierce determination to thrive. But how? With Kit’s friendship and guidance, the three friends launch themselves into Italian life, pursuing passions long-forgotten—and with drastic and unforeseeable results. 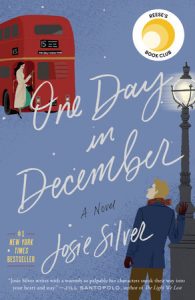 One Day in December by Josie Silver

Laurie is pretty sure love at first sight doesn’t exist anywhere but the movies. But then, through a misted-up bus window one snowy December day, she sees a man who she knows instantly is the one. Their eyes meet, there’s a moment of pure magic . . . and then her bus drives away.

What follows for Laurie, Sarah and Jack is ten years of friendship, heartbreak, missed opportunities, roads not taken, and destinies reconsidered. One Day in December is a joyous, heartwarming and immensely moving love story to escape into and a reminder that fate takes inexplicable turns along the route to happiness.

“Get ready to be swept up in a whirlwind romance. It absolutely charmed me.”—Reese Witherspoon 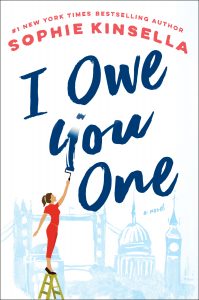 I Owe You One by Sophie Kinsella

From #1 New York Times bestselling author Sophie Kinsella comes an irresistible story of love and empowerment about a young woman with a complicated family, a handsome man who might be “the one,” and an IOU that changes everything.

Fixie Farr has always lived by her father’s motto: “Family first.” And since her dad passed away, Fixie spends all her time picking up the slack from her siblings instead of striking out on her own.

It’s simply not in Fixie’s nature to say no to people. So when a handsome stranger in a coffee shop asks her to watch his laptop for a moment, she not only agrees—she ends up saving it from certain disaster. To thank Fixie for her quick thinking, the computer’s owner, Sebastian, scribbles an IOU on a coffee sleeve and attaches his business card. Fixie laughs it off—she’d never actually claim an IOU from a stranger. Would she?

But then Fixie’s childhood crush, Ryan, comes back into her life, and his lack of a profession pushes all of Fixie’s buttons. As always, she wants nothing for herself—but she’d love Seb to give Ryan a job. No sooner has Seb agreed than the tables are turned once more and a new series of IOUs between Seb and Fixie ensues. Soon Fixie, Ms. Fixit for everyone else, is torn between her family and the life she really wants. Does she have the courage to take a stand? Will she finally grab the life, and love, she really wants? 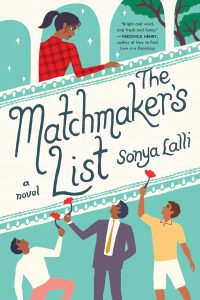 One devoted modern girl + a meddlesome, traditional grandmother = a heartwarming multicultural romantic comedy about finding love where you least expect it.

Raina Anand may have finally given in to family pressure and agreed to let her grandmother play matchmaker, but that doesn’t mean she has to like it–or that she has to play by the rules. Nani always took Raina’s side when she tried to push past the traditional expectations of their tight-knit Indian-immigrant community, but now she’s ambushing Raina with a list of suitable bachelors. Is it too much to ask for a little space? Besides, what Nani doesn’t know won’t hurt her…

As Raina’s life spirals into a parade of Nani-approved bachelors and disastrous blind dates, she must find a way out of this modern-day arranged-marriage trap without shattering her beloved grandmother’s dreams. 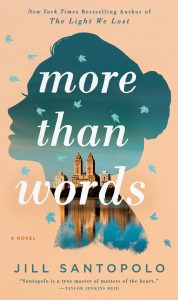 More Than Words by Jill Santopolo

From the New York Times bestselling author of The Light We Lost comes a heartbreaking and romantic novel about grief, loss, love, and self-discovery, and how we choose which life we are meant to live.

Nina Gregory has always been a good daughter. Raised by her father, owner of New York City’s glamorous Gregory Hotels, Nina was taught that family, reputation, and legacy are what matter most. And Tim–her devoted boyfriend and best friend since childhood–feels the same. But when Nina’s father dies, he leaves behind a secret that shocks Nina to her core.

As her world falls apart, Nina begins to see the men in her life–her father, her boyfriend, and unexpectedly, her boss, Rafael–in a new light. Soon Nina finds herself caught between the world she loves, and a passion that could upend everything. 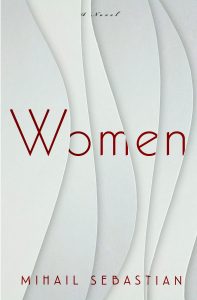 A rediscovered classic from the author of For Two Thousand Years, this remarkable novel presents nuanced snapshots of love in the early twentieth century.

Stefan Valeriu, a young man from Romania who has just completed his medical studies in Paris, spends his vacation in the Alps, where he quickly becomes entangled with three different women. We follow Stefan after his return to Paris as he reflects on the women in his life, at times playing the lover, and at others observing shrewdly from the periphery. 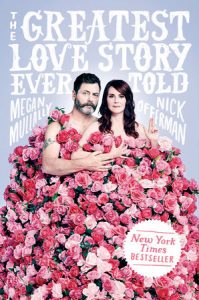 Megan Mullally and Nick Offerman reveal the full story behind their epic romance— presented as an oral history in a series of conversations between the couple, the book features anecdotes, hijinks, photos, and a veritable grab bag of tomfoolery.

The year: 2000. The setting: Los Angeles. A gorgeous virtuoso of an actress agreed to star in a random play, and a basement-dwelling scenic carpenter said he would assay a supporting role in the selfsame pageant. At the first rehearsal she surveyed her fellow cast members, determining if any of the men might qualify to provide her with a satisfying fling. Her gaze fell upon the carpenter, and like a bolt of lightning the thought struck her: no dice. Moving on.

Yet, unbeknownst to our protagonists, Cupid had merely set down his bow and picked up a rocket launcher . . . that fired a love rocket (not a euphemism). The players were Megan Mullally and Nick Offerman, and the resulting romance, once ignited, was . . . epic.

Eighteen years later, they’re still very much in love and have finally decided to reveal the philosophical mountains they have conquered, the lessons they’ve learned, and the myriad jigsaw puzzles they’ve completed. 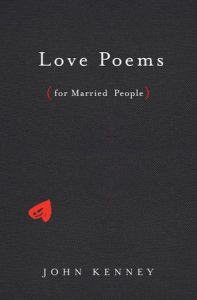 First published on Valentine’s Day in 2016, John Kenney’s collection of poems for married people quickly became one of the most shared New Yorker pieces of all time. Full of hilarious wit, dynamic energy, and a heavy dose of reality, these poems took the seminal genre and turned it upside down and left to dry in the dishwasher. The original selection, featuring a range of topics from parental gripes to dwindling sex lives, is a perennial favorite, skyrocketing to the top of the New Yorker‘s most-shared list each year, and now Kenney is writing a collection of new poems that dig even deeper into what it’s like to be married to the person you love.