What Will You Read for February? 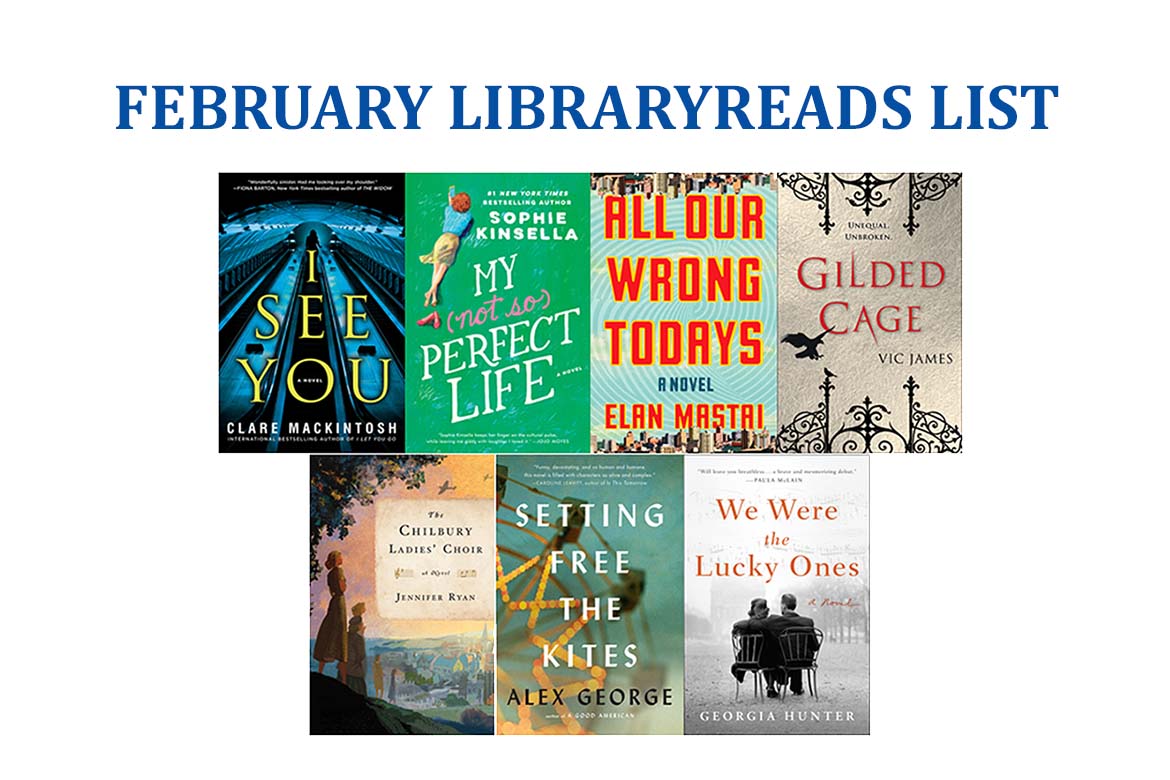 Public library staff across the nation have spoken! Congratulations to all the books selected for theFebruary 2017 LibraryReads Top Ten list!

I See You (#1)
By Clare Mackintosh
“Zoe Walker sees her picture in a personal ad for a dating website.  At first she thinks there must be a mistake. She soon learns that other women whose pictures have appeared in these ads have been subjected to violent crimes. Zoe contacts the police. PC Kelly Smith, a disgraced former detective, works to find the mastermind behind the website and redeem herself. As each day passes Zoe becomes more and more paranoid and suspicious of everyone she meets. Told from three different viewpoints, the tension builds and kept me on the edge of my seat.”–Karen Zeibak, Wilton Library Association, Wilton, CT

My Not So Perfect Life: A Novel  (#3)
By Sophie Kinsella
“Katie Brenner has moved from her family’s farm to the big city. She goes to great lengths to present the face that she thinks the world wants to see. When she’s fired from her job and forced to return home she  helps her family get their new venture up and running. Learning the truth about herself and those around her leads to the realization that nobody’s life is as perfect as it seems from the outside. Kinsella never loses her sense of humor, even when her characters are facing serious situations. She makes you believe in them and leaves you wanting to know what happens next.”–Kristen Gramer, Lewes Public Library, Lewes, DE

All Our Wrong Todays (#4)
By Elan Mastai
“Mastai’s debut is a clever and funny time travel romp which turns into an, action-packed science fiction thriller.Tom Barren stumbles through life and accidentally ruins the glittering jetpack and flying car future of 2016, replacing it with the one you and I know. The world may be worse off, but Tom’s life is better than ever. That is, until his mind starts splitting between the two realities and he must track down the genius who invented the other future. Tom’s journey through the past, across realities, and inside his mind make for a thrilling conclusion.”–Dan Brooks, Wake County Public Libraries, Cary, NC

Gilded Cage (#6)
By Vic James
“Welcome to a world where magic grants you access to all the benefits of wealth and power. This is the story of two families, one from magic and one not. When Abi comes up with a plan to help her family by having them serve one of the most powerful magical families, she thinks it will save them. But when her brother is sent to one of the harshest work camps, the plan seems less likely to keep them alive. Her brother must face the dangers of slavery while Abi and the others will see grandeur and wealth but also see the rotten core that is gilded in gold.”–Suzanne Christensen, Spanish Fork Public Library, Spanish Fork, UT

The Chilbury Ladies’ Choir: A Novel  (#7)
By Jennifer Ryan
“The Chilbury Ladies’ Choir is  a powerful story of both hope and despair. Told through diary entries, this is a wonderful glimpse into life in a small British town during WWII. Ryan is a skilled writer who gives each diary entry a clear voice: Mrs. Paltry is dishonest and scheming, Venetia, the self-centered young woman in love with a mysterious man, Kitty, the love struck teenager with big dreams, and Mrs. Tilling, the midwife and moral compass of the town. Through their entries, you really see them grow. The power of music brings them strength that they didn’t know that they had.”–Shari Suarez, Genesee District Library, Goodrich MI

Setting Free the Kites  (#8)
By Alex George
“Robert stands watching the demolition of the old paper mill that stood in the center of town and served as a constant reminder of his friend, Nathan. The reader is transported from present day to 1970s Maine, where Robbie finds his friendship with Nathan a literal escape from the bullying at school, and a figurative way of coping with his brother’s struggle with muscular dystrophy. The portrayal of family dynamics in the wake of tragedy is reminiscent of Everything I Never Told You by Celeste Ng but with an anchoring of boyhood friendship in this coming of age tale.”–Emma DeLooze-Klein, Kirkwood Public Library, Kirkwood, MO

We Were the Lucky Ones (#9)
By Georgia Hunter
“When Georgia Hunter learns that she is a descendant of large family of Holocaust survivors, she knows that she is destined to be the recorder of their story. This is the result of years of research to gather as much detail about her relatives as she possibly can.  How this group of people manages to survive years of persecution and imprisonment is astounding.  It is an inspiring read, and one that honors the memory and struggle of not just the author’s family, but all of the people who suffered during the war.”–Mary Coe, Fairfield Woods Branch Library, CT