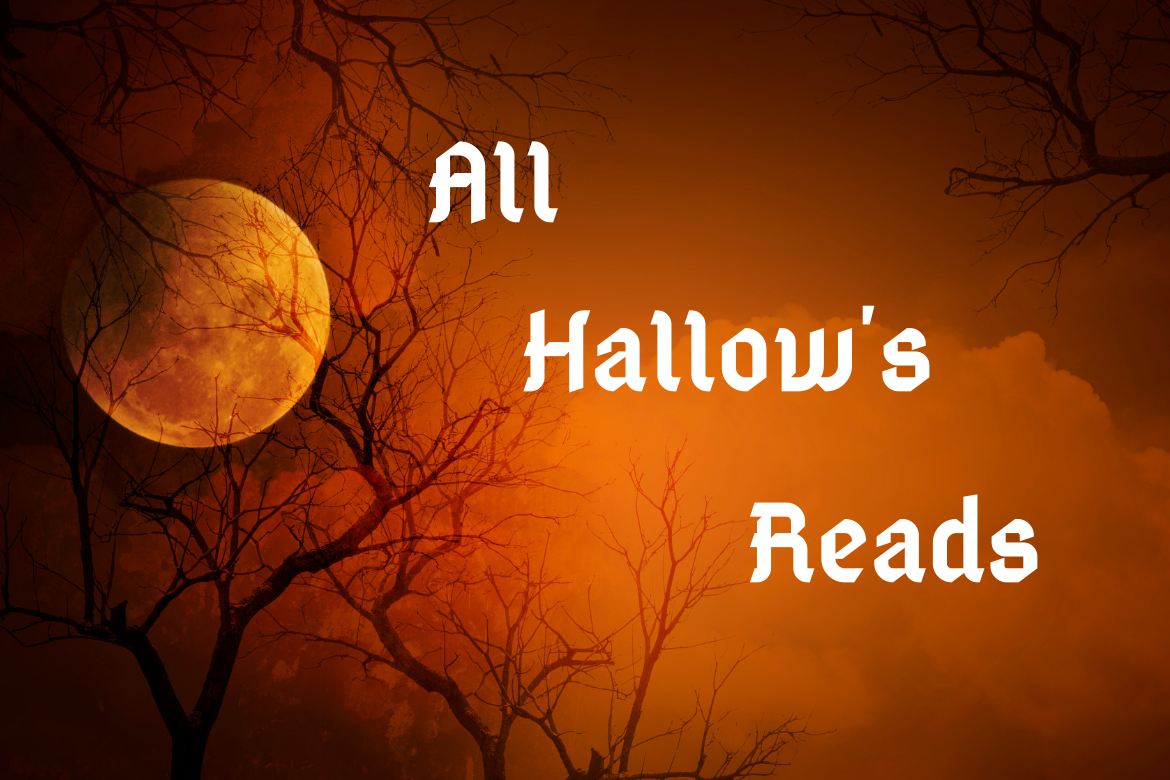 Check out these thrilling and chilling reads for Halloween . . . if you dare.

Plus, enter to win our Penguin Horror Classics Sweepstakes!
See below for more information. 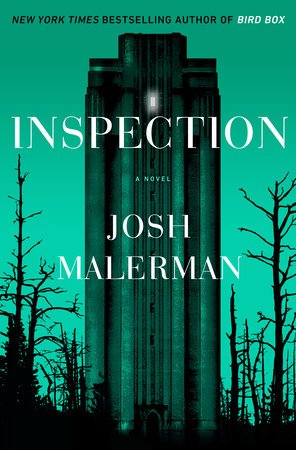 Boys are being trained at one school for geniuses, girls at another. Neither knows the other exists—until now. The New York Times bestselling author of Bird Box invites you into a world of secrets and chills in a coming-of-age story like no other.

J is a student at a school deep in a forest far away from the rest of the world.

J is one of only twenty-six students, all of whom think of the school’s enigmatic founder as their father. J’s peers are the only family he has ever had. The students are being trained to be prodigies of art, science, and athletics, and their life at the school is all they know—and all they are allowed to know.

But J suspects that there is something out there, beyond the pines, that the founder does not want him to see, and he’s beginning to ask questions. What is the real purpose of this place? Why can the students never leave? And what secrets is their father hiding from them?

Meanwhile, on the other side of the forest, in a school very much like J’s, a girl named K is asking the same questions. J has never seen a girl, and K has never seen a boy. As K and J work to investigate the secrets of their two strange schools, they come to discover something even more mysterious: each other. 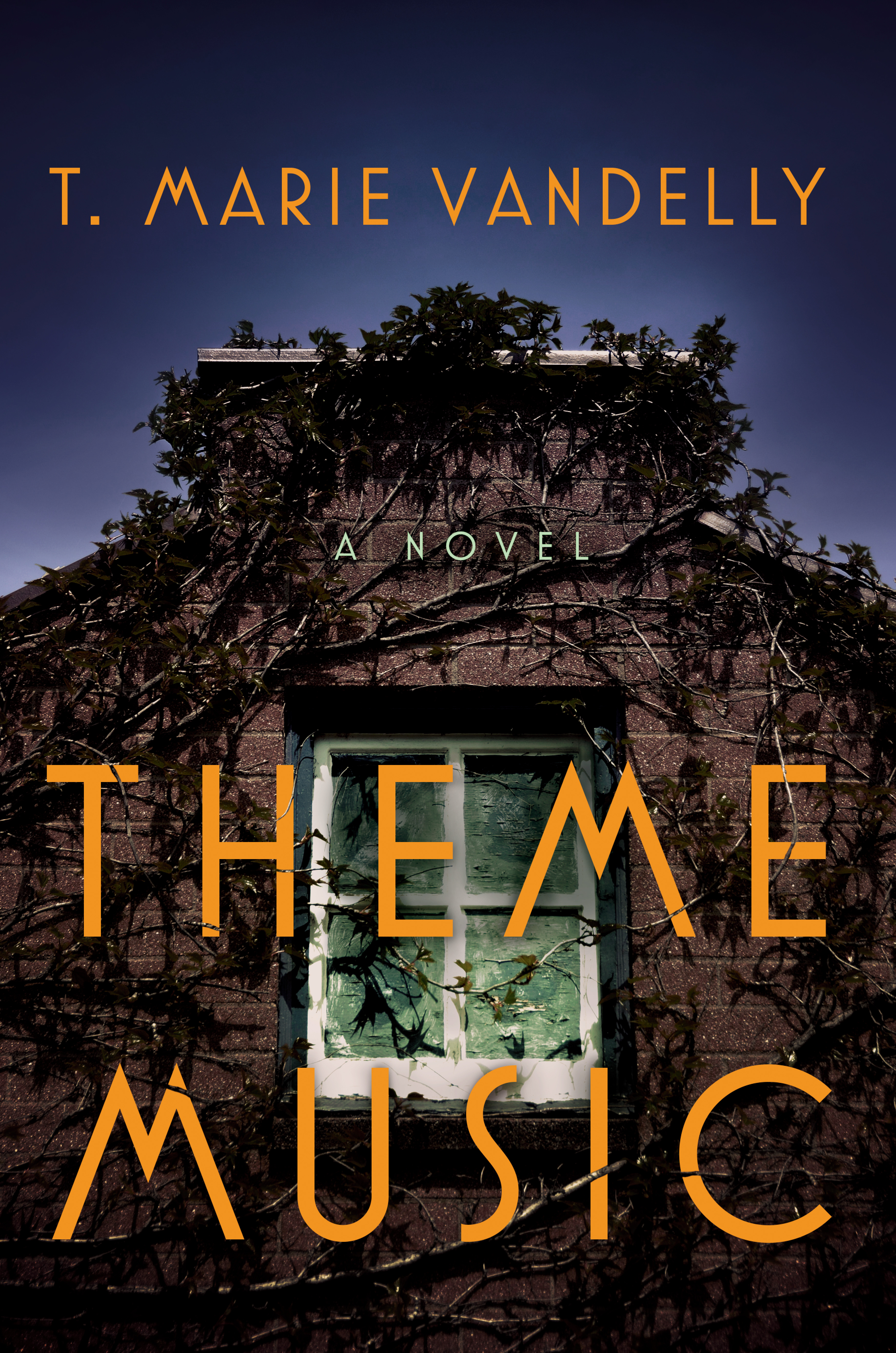 For the lucky among us, life is what you make of it; but for Dixie Wheeler, the theme music for her story was chosen by another long ago, on the day her father butchered her mother and brothers and then slashed a knife across his own throat. Only one-year-old Dixie was spared, becoming infamously known as Baby Blue for the song left playing in the aftermath of the slaughter.

Twenty-five years later, Dixie is still desperate for a connection to the family she can’t remember. So when her childhood home goes up for sale, Dixie sets aside all reason and moves in. But as the ghosts of her family seemingly begin to take up residence in the house that was once theirs, Dixie starts to question her own sanity and wonders if the evil force menacing her is that of her father or a demon of her own making.

In order to make sense of her present, Dixie becomes determined to unravel the truth of her past and seeks out the detective who originally investigated the murders. But the more she learns, the more she opens up the uncomfortable possibility that the sins of her father may belong to another. As bodies begin to pile up around her, Dixie must find a way to expose the lunacy behind her family’s massacre to save her few loved ones that are still alive—and whatever scrap of sanity she has left. 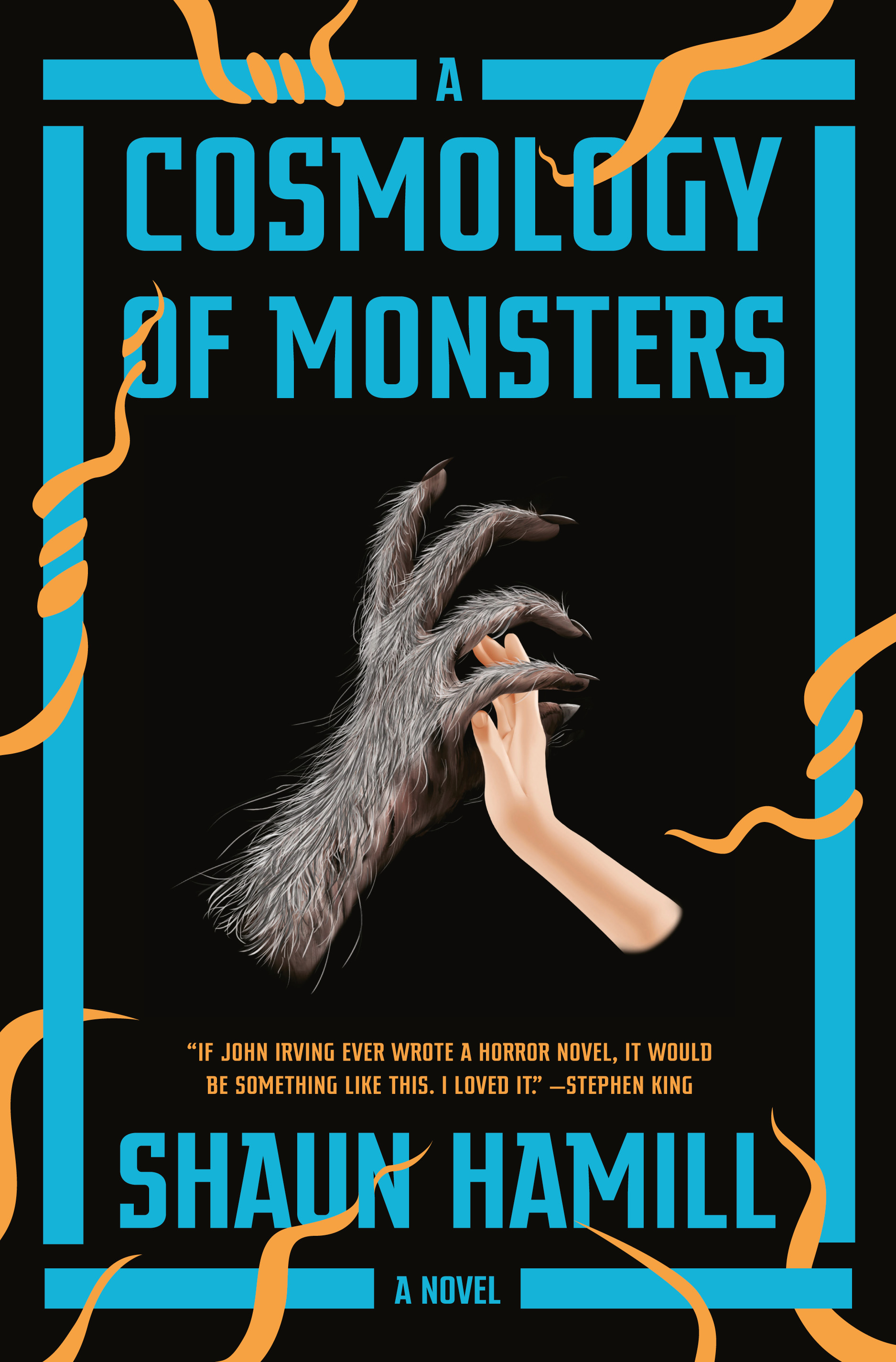 A Cosmology of Monsters by Shaun Hamill

“If John Irving ever wrote a horror novel, it would be something like this. I loved it.” —Stephen King

His father saw them—and built a shrine to them with The Wandering Dark, an immersive horror experience that the whole family operates.

His practical mother has caught glimpses of terrors but refuses to believe—too focused on keeping the family from falling apart.

And his eldest sister, the dramatic and vulnerable Sydney, won’t admit to seeing anything but the beckoning glow of the spotlight . . . until it swallows her up.

Noah Turner sees monsters. But, unlike his family, Noah chooses to let them in. 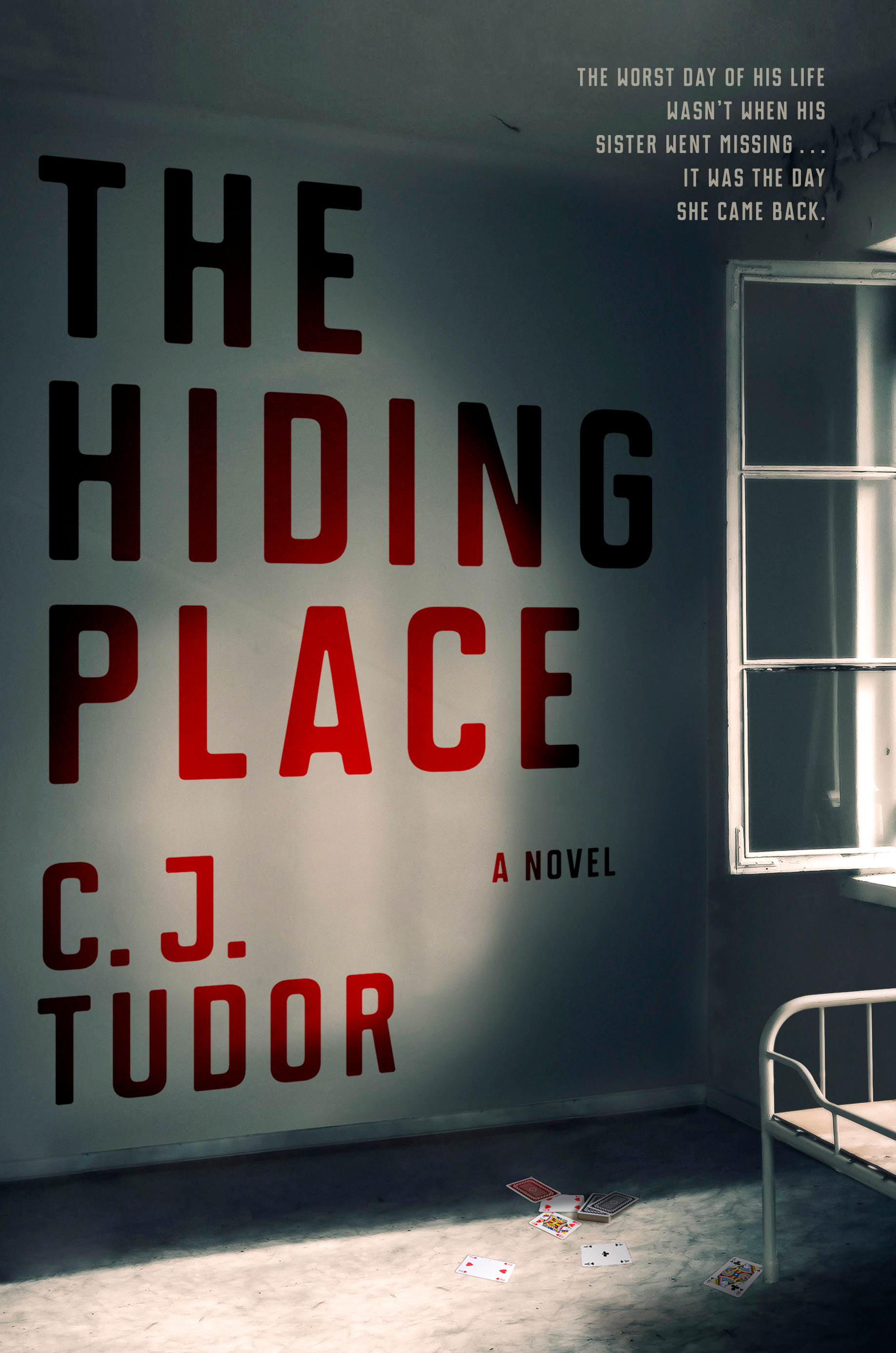 From the acclaimed author of The Chalk Man comes an unputdownable psychological thriller about a man who returns home to settle old scores—and uncovers a secret darker than he could have imagined.

Joe never wanted to come back to Arnhill. After the way things ended with his old gang—the betrayal, the suicide—and what happened when his sister went missing, the last thing he wanted to do was return to his hometown. But Joe doesn’t have a choice, not after a chilling email surfaces in his inbox: I know what happened to your sister. It’s happening again . . .

Lying his way into a teaching job at his former high school is the easy part. Facing off with onetime friends who aren’t too happy to have him back in town—while avoiding the enemies he’s made in the years since—is tougher. But the hardest part of all will be returning to the abandoned mine where his life changed forever, and finally confronting the horrifying truth about Arnhill, his sister, and himself. Because for Joe, the worst moment of his life wasn’t the day his sister went missing.

It was the day she came back. 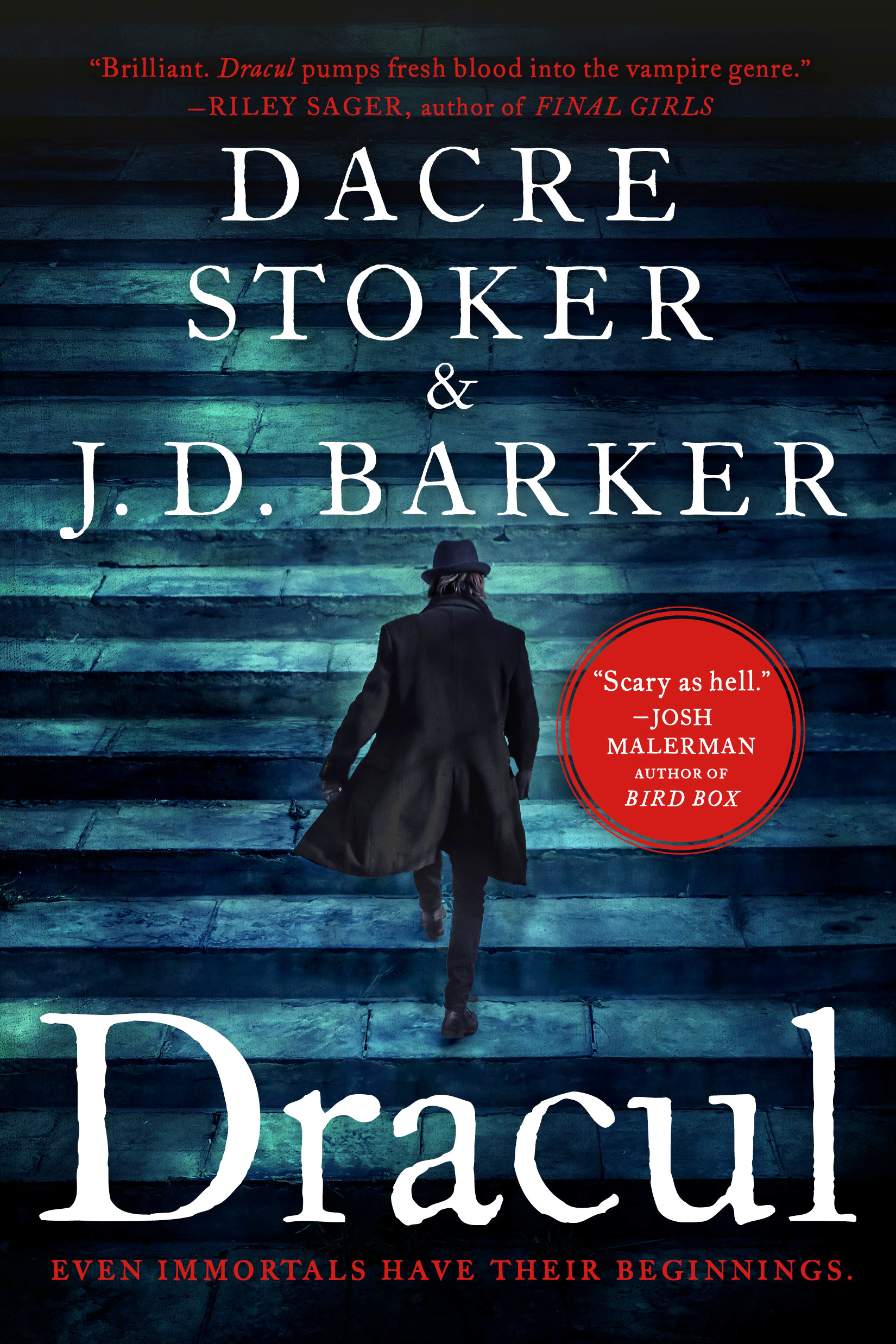 The prequel to Dracula, inspired by notes and texts left behind by the author of the classic novel, Dracul is a supernatural thriller that reveals not only Dracula’s true origins but Bram Stoker’s—and the tale of the enigmatic woman who connects them.

It is 1868, and a twenty-one-year-old Bram Stoker waits in a desolate tower to face an indescribable evil. Armed only with crucifixes, holy water, and a rifle, he prays to survive a single night, the longest of his life. Desperate to record what he has witnessed, Bram scribbles down the events that led him here…

A sickly child, Bram spent his early days bedridden in his parents’ Dublin home, tended to by his caretaker, a young woman named Ellen Crone. When a string of strange deaths occur in a nearby town, Bram and his sister Matilda detect a pattern of bizarre behavior by Ellen—a mystery that deepens chillingly until Ellen vanishes suddenly from their lives. Years later, Matilda returns from studying in Paris to tell Bram the news that she has seen Ellen—and that the nightmare they’ve thought long ended is only beginning. 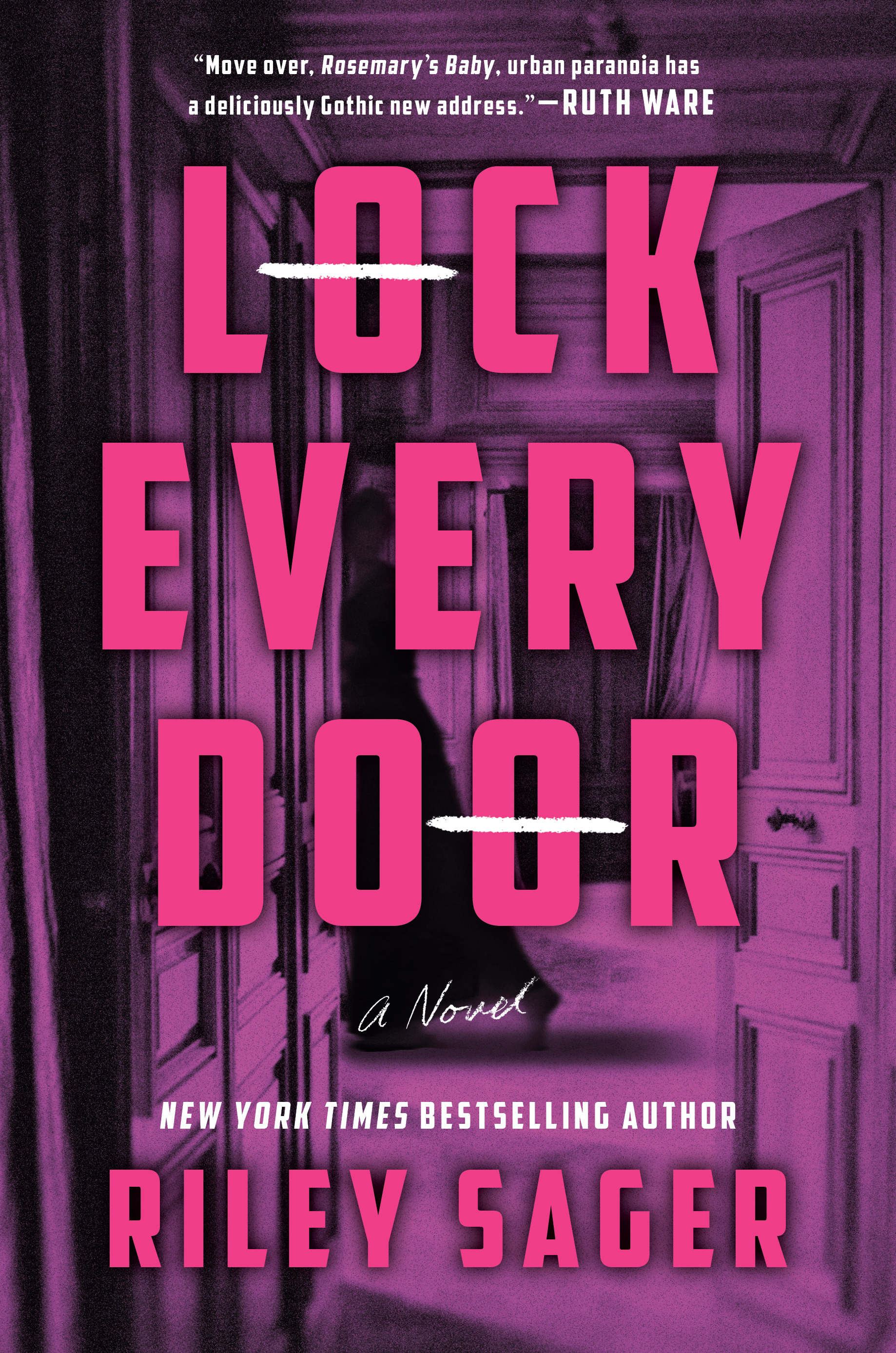 Lock Every Door by Riley Sager

The next heart-pounding thriller from New York Times bestselling author Riley Sager follows a young woman whose new job apartment sitting in one of New York’s oldest and most glamorous buildings may cost more than it pays.

No visitors. No nights spent away from the apartment. No disturbing the other residents, all of whom are rich or famous or both. These are the only rules for Jules Larsen’s new job as an apartment sitter at the Bartholomew, one of Manhattan’s most high-profile and mysterious buildings. Recently heartbroken and just plain broke, Jules is taken in by the splendor of her surroundings and accepts the terms, ready to leave her past life behind.

As she gets to know the residents and staff of the Bartholomew, Jules finds herself drawn to fellow apartment sitter Ingrid, who comfortingly reminds her of the sister she lost eight years ago. When Ingrid confides that the Bartholomew is not what it seems and the dark history hidden beneath its gleaming facade is starting to frighten her, Jules brushes it off as a harmless ghost story . . . until the next day, when Ingrid disappears.

Searching for the truth about Ingrid’s disappearance, Jules digs deeper into the Bartholomew’s sordid past and into the secrets kept within its walls. What she discovers pits Jules against the clock as she races to unmask a killer, expose the building’s hidden past, and escape the Bartholomew before her temporary status becomes permanent. 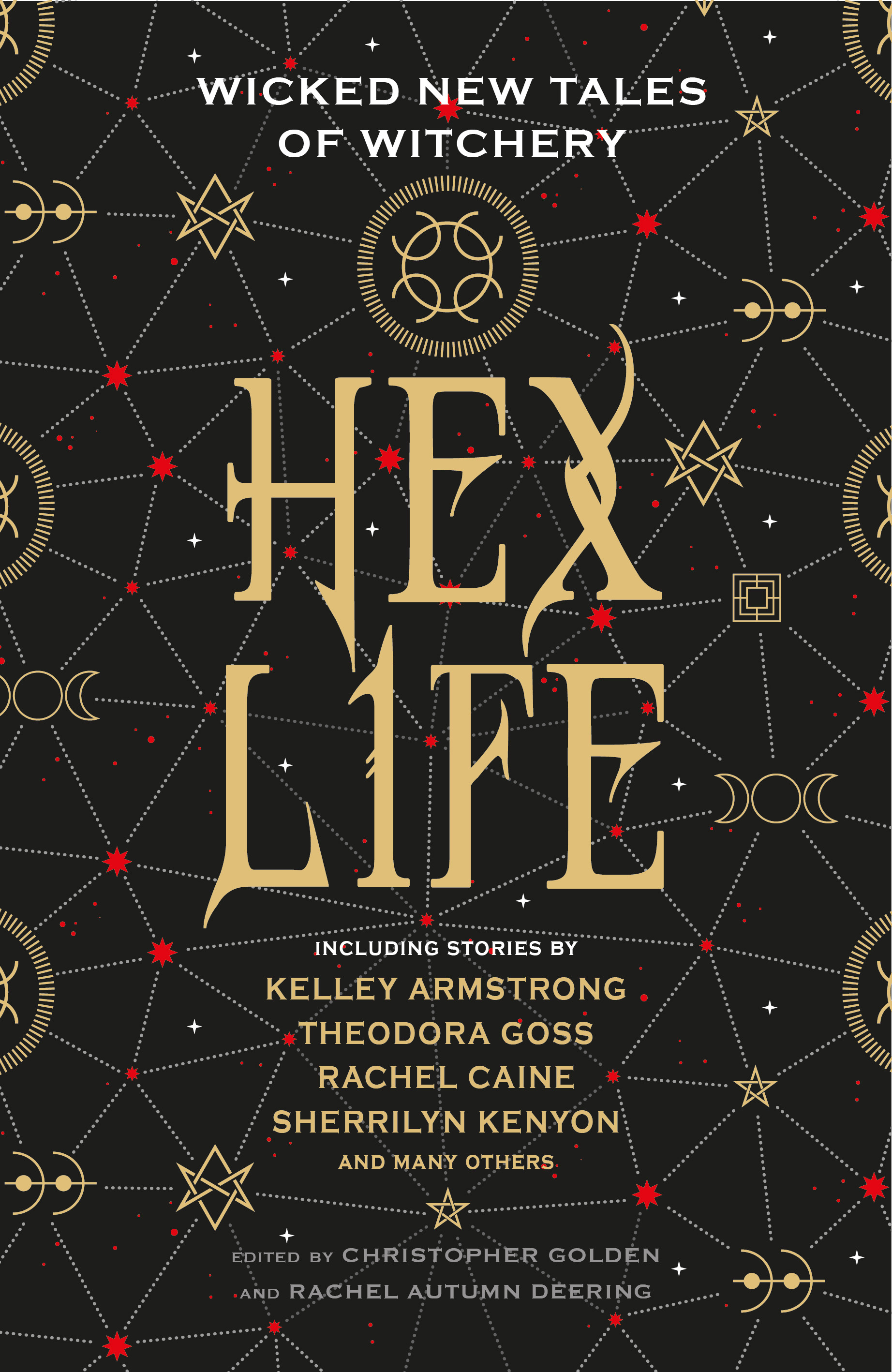 These are tales of witches, wickedness, evil and cunning. Stories of disruption and subversion by today’s women you should fear. Including Kelley Armstrong, Rachel Caine and Sherrilyn Kenyon writing in their own bestselling universes.

These witches might be monstrous, or they might be heroes, depending on their own definitions. Even the kind hostess with the candy cottage thought of herself as the hero of her own story. After all, a woman’s gotta eat. 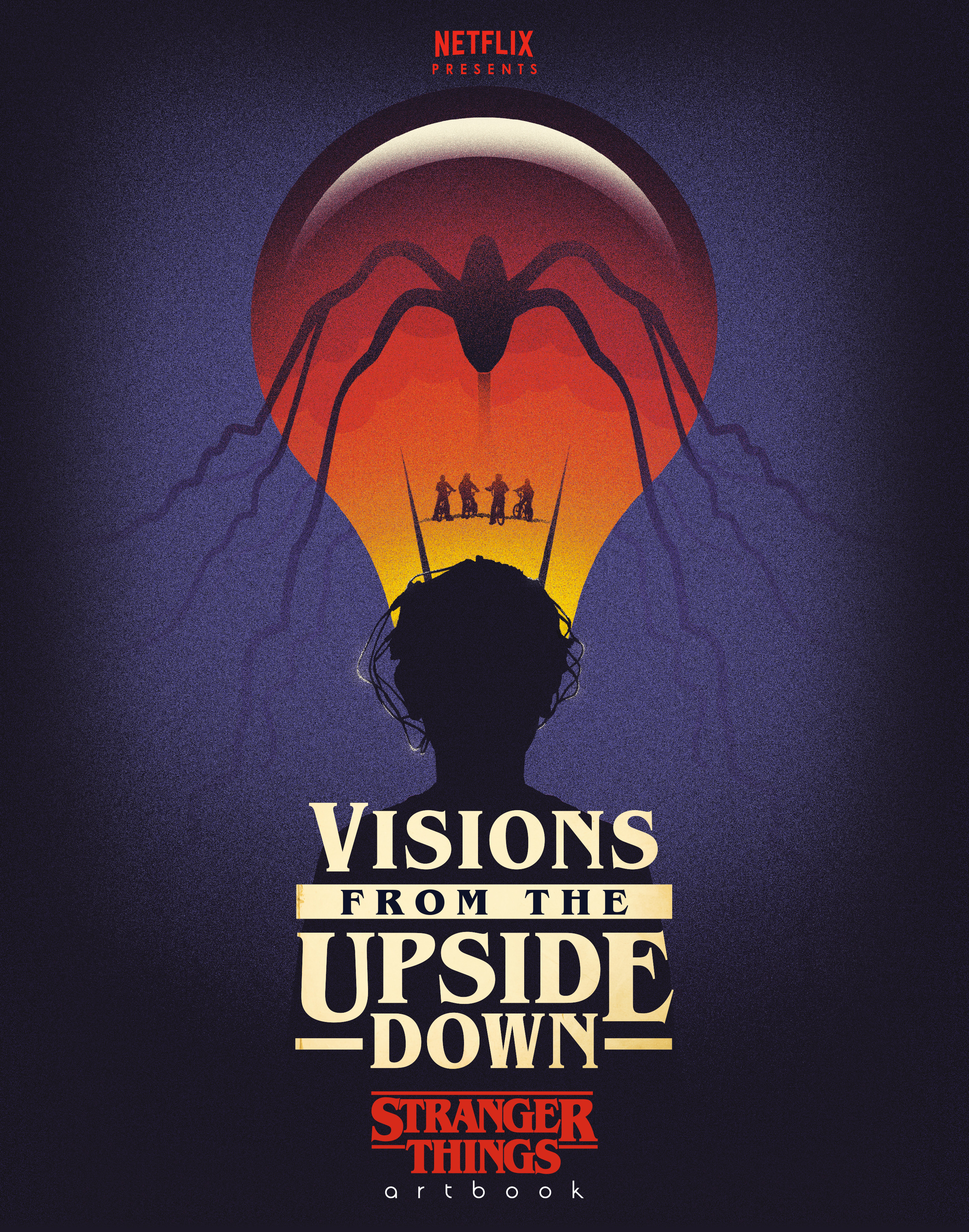 Visions from the Upside Down: Stranger Things Art Book by Netflix; Illustrated by Bill Sienkiewicz, Rian Hughes, and Orlando Arocena; Edited by Printed in Blood

Over 200 artists present their own unique visions of Stranger Things in a stunning, full-color celebration of the runaway hit Netflix series.

In honor of Stranger Things, the innovative pop culture enthusiasts at Printed In Blood are proud to present the latest release in their ongoing series of artbooks. More than two hundred artists, drawn from the earthly dimensions of comics, illustration, fine art, videogames, and animation, have come together to bring us a unique vision of the world of Hawkins, Indiana. Come dig into this collection of more than two hundred brand-new images and see what new worlds you might discover lurking just beneath the surface.

The Mothers of All Monsters: 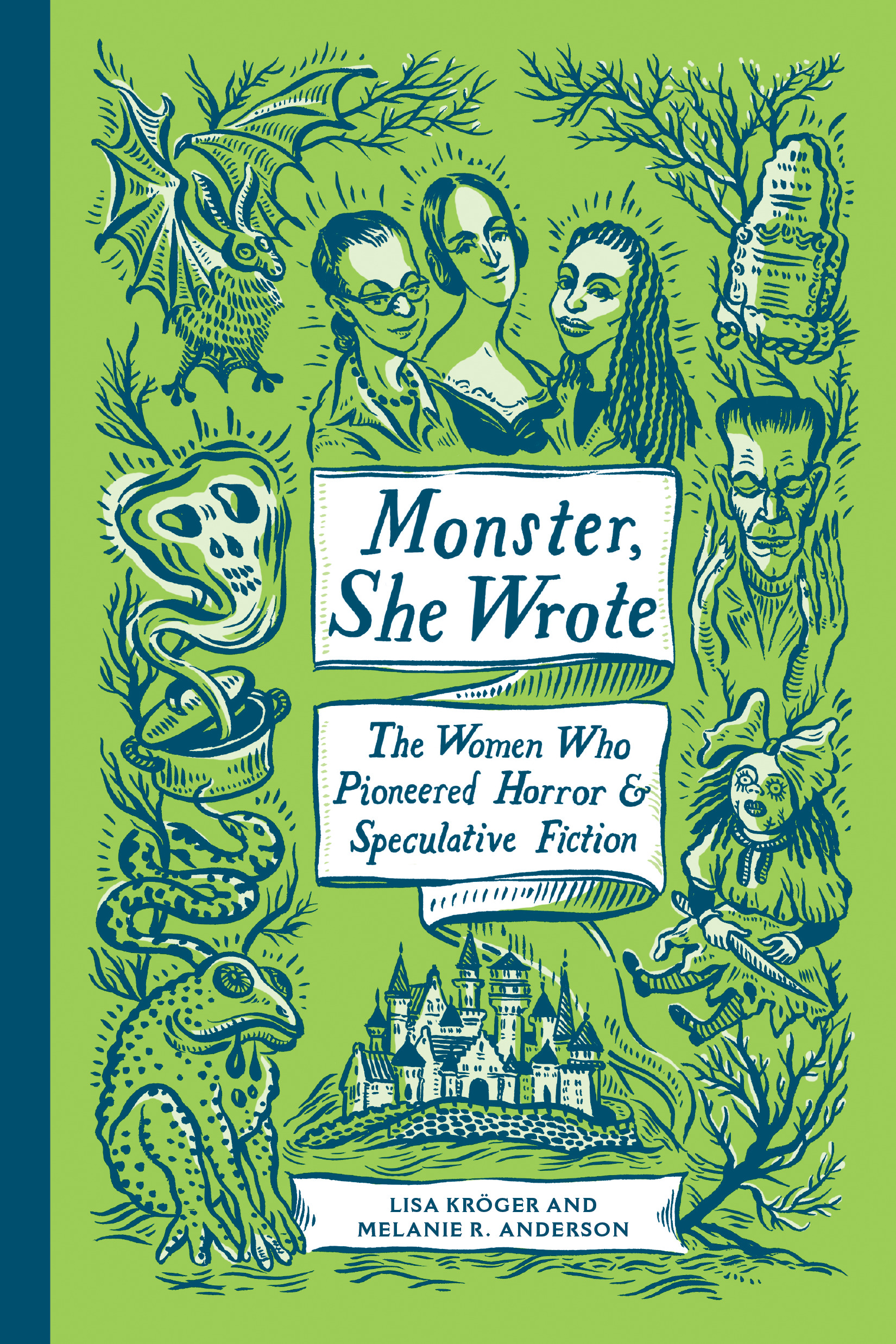 Monster, She Wrote: The Women Who Pioneered Horror and Speculated Fiction by Lisa Kröger and Melanie R. Anderson

Meet the women writers who defied convention to craft some of literature’s strangest tales, from Frankenstein to The Haunting of Hill House and beyond.

Frankenstein was just the beginning: horror stories and other weird fiction wouldn’t exist without the women who created it. From Gothic ghost stories to psychological horror to science fiction, women have been primary architects of speculative literature of all sorts. And their own life stories are as intriguing as their fiction. Everyone knows about Mary Shelley, creator of Frankenstein, who was rumored to keep her late husband’s heart in her desk drawer. But have you heard of Margaret “Mad Madge” Cavendish, who wrote a science-fiction epic 150 years earlier (and liked to wear topless gowns to the theater)? If you know the astounding work of Shirley Jackson, whose novel The Haunting of Hill House was reinvented as a Netflix series, then try the psychological hauntings of Violet Paget, who was openly involved in long-term romantic relationships with women in the Victorian era. You’ll meet celebrated icons (Ann Radcliffe, V. C. Andrews), forgotten wordsmiths (Eli Colter, Ruby Jean Jensen), and today’s vanguard (Helen Oyeyemi). Curated reading lists point you to their most spine-chilling tales. 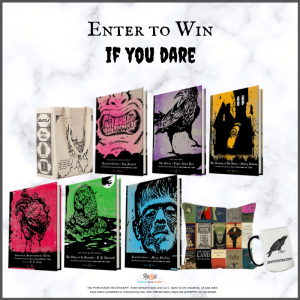 One lucky winner will receive a terrifying assortment of classic horror collectibles—including the complete Penguin Horror Series (Haunted Castles, The Raven, The Haunting of Hill House, American Supernatural Tales, The Thing on the Doorstep and Other Weird Stories, Frankenstein), a Dracula Book Tote, a “Nevermore” Mug, and a Classic Horror Pillow.

Enter for Your Chance to Win.