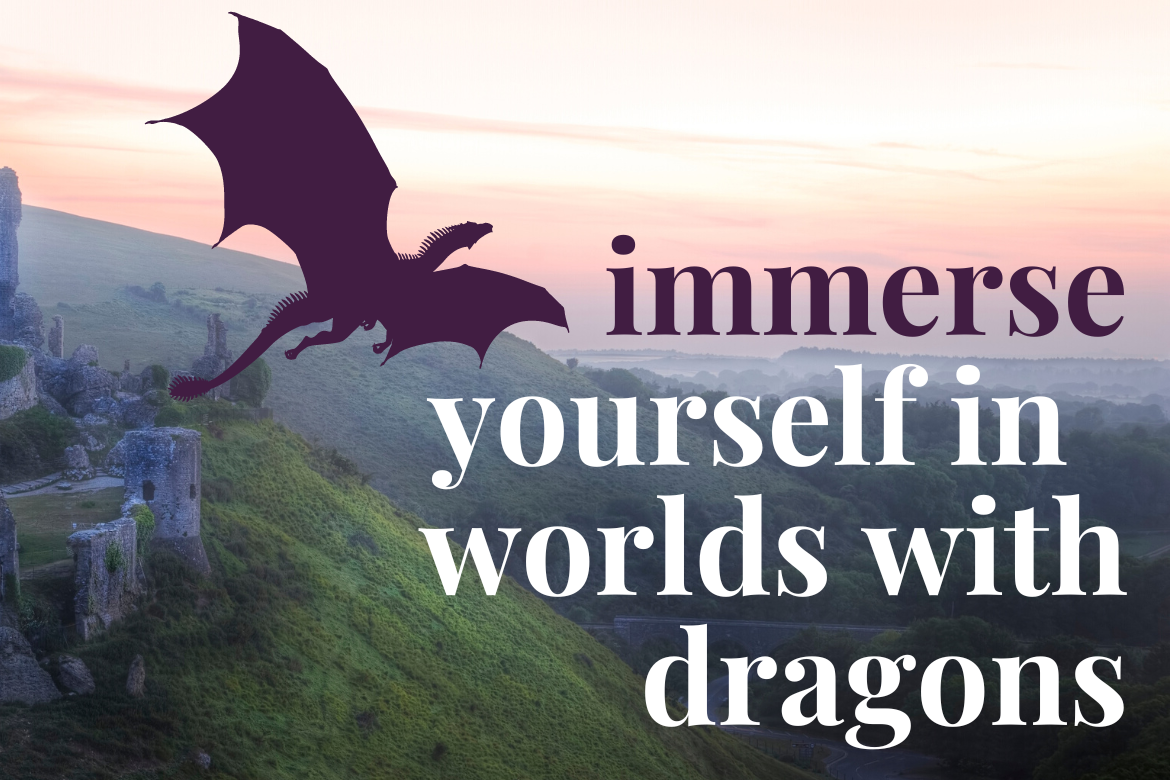 As we all patiently wait for the premiere of House of the Dragon this weekend—and the next Game of Thrones book 🤞—explore these fantasy books and roleplaying sets and immerse yourself in Westeros and other epic worlds with dragons.

The World of Game of Thrones: 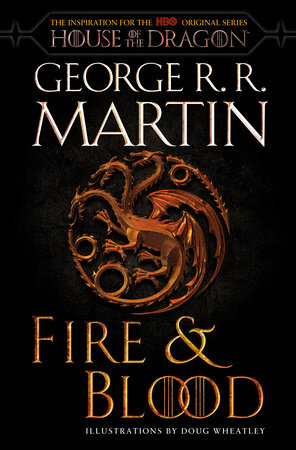 House of the Dragon—premieres August 21st on HBO Max.

The thrilling history of the Targaryens comes to life in this masterly work, the inspiration for HBO’s upcoming Game of Thrones prequel series House of the Dragon.

“The thrill of Fire & Blood is the thrill of all Martin’s fantasy work: familiar myths debunked, the whole trope table flipped.”—Entertainment Weekly

Click for More Books in the Targaryen Dynasty: The House of the Dragon Series. 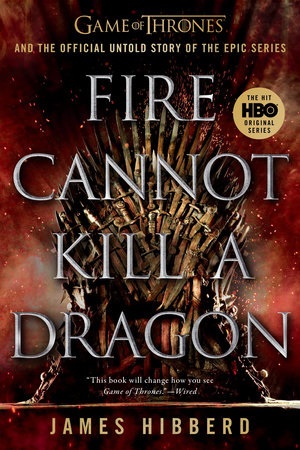 Fire Cannot Kill a Dragon: Game of Thrones and the Official Untold Story of the Epic Series by James Hibberd

The official, definitive oral history of the blockbuster show from Entertainment Weekly’s James Hibberd, endorsed by George R. R. Martin himself (who calls it “an amazing read”), reveals the one Game of Thrones tale that has yet to be told: the thirteen-year behind-the-scenes struggle to make the show. 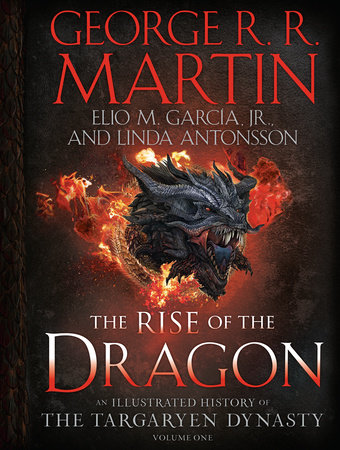 The Rise of the Dragon: An Illustrated History of the Targaryen Dynasty, Volume One by George R. R. Martin, Elio M. García Jr., and Linda Antonsson

This lavish visual history—featuring over 180 all-new illustrations—is a stunning introduction to House Targaryen, the iconic family at the heart of HBO’s Game of Thrones prequel series, House of the Dragon.

For hundreds of years, the Targaryens sat the Iron Throne of Westeros while their dragons ruled the skies. The story of the only family of dragonlords to survive Valyria’s Doom is a tale of twisty politics, alliances and betrayals, and acts both noble and craven. The Rise of the Dragon chronicles the creation and rise of Targaryen power in Westeros, covering the history first told in George R. R. Martin’s epic Fire & Blood, from Aegon Targaryen’s conquest of Westeros through to the infamous Dance of the Dragons—the bloody civil war that nearly undid Targaryen rule for good. 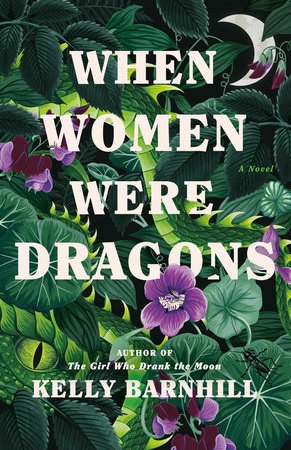 When Women Were Dragons: A Novel by Kelly Barnhill

A rollicking feminist tale set in 1950s America where thousands of women have spontaneously transformed into dragons, exploding notions of a woman’s place in the world and expanding minds about accepting others for who they really are. The first adult novel by the Newbery award-winning author of The Girl Who Drank the Moon.

“Ferociously imagined, incandescent with feeling, this book is urgent and necessary and as exhilarating as a ride on dragonback.”—Lev Grossman, author of The Magicians Trilogy

“[A] riveting historical fantasy…What’s surprising about Barnhill’s rare foray into adult fiction is its subversiveness and feminist rage. It’s a powerful, searing novel that feels deeply true, despite its magical premise.”—BuzzFeed 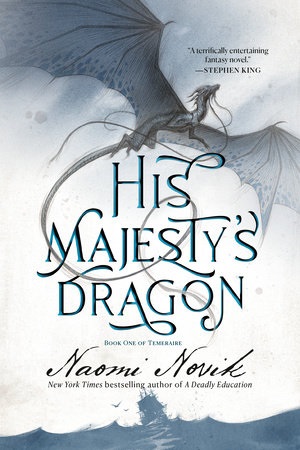 His Majesty’s Dragon: A Novel by Naomi Novik

In the first novel of the New York Times bestselling Temeraire series, a rare bond is formed between a young man and a dragon, and together they must battle in the Napoleonic Wars.

“Just when you think you’ve seen every variation possible on the dragon story, along comes Naomi Novik. Her wonderful Temeraire is a dragon for the ages.”—Terry Brooks

Check Out More Books in the Temeraire Series. 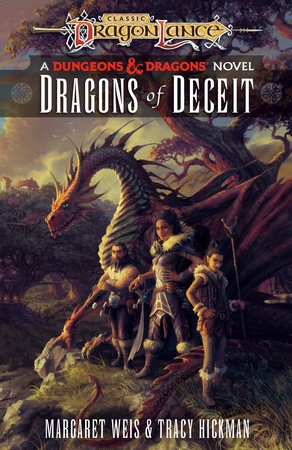 Margaret Weis and Tracy Hickman return to the unforgettable world of the New York Times bestselling Dragonlance series as a new heroine—desperate to restore her beloved father to life—sets off on a quest to change time.

“I love Dragonlance and I love Margaret Weis and Tracy Hickman. Plain and simple. Their books are my favorite fantasy series of all time.”—Joe Manganiello 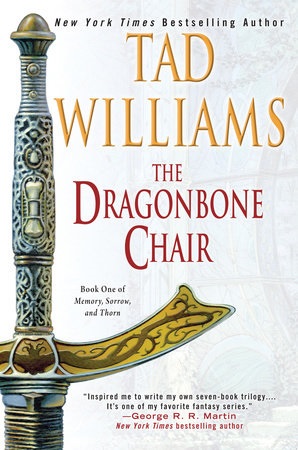 The Dragonbone Chair: A Novel by Tad Williams

With The Dragonbone Chair, Tad Williams introduced readers to the incredible fantasy world of Osten Ard. His beloved, internationally bestselling series Memory, Sorrow, and Thorn inspired a generation of modern fantasy writers, including George R.R. Martin, Patrick Rothfuss, and Christopher Paolini, and defined Tad Williams as one of the most important fantasy writers of our time.

“One of my favorite fantasy series.” —George R. R. Martin

“One of the great fantasy epics of all time.” —Christopher Paolini 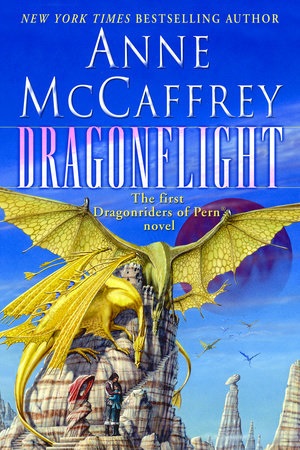 Dragonflight: A Novel by Anne McCaffrey

Volume I of The Dragonriders of Pern®, the groundbreaking series by master storyteller Anne McCaffrey.

On a beautiful world called Pern, an ancient way of life is about to come under attack from a myth that is all too real. Lessa is an outcast survivor—her parents murdered, her birthright stolen—a strong young woman who has never stopped dreaming of revenge. But when an ancient threat to Pern reemerges, Lessa will rise—upon the back of a great dragon with whom she shares a telepathic bond more intimate than any human connection. Together, dragon and rider will fly . . . and Pern will be changed forever.

Check Out More Books in the Pern Series. 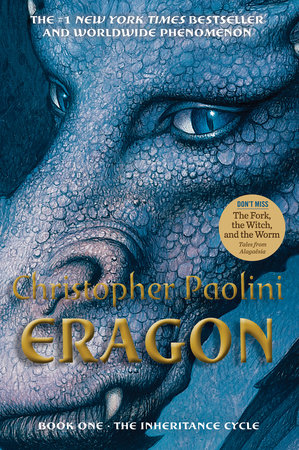 When fifteen-year-old Eragon finds a polished blue stone in the forest, he thinks it is the lucky discovery of a poor farm boy. But when the stone brings a dragon hatchling, Eragon soon realizes he has stumbled upon a legacy nearly as old as the Empire itself. 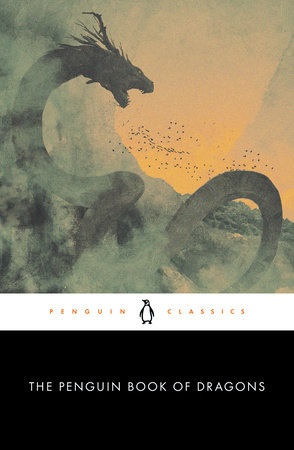 The Penguin Book of Dragons Edited by Scott G. Bruce

Two thousand years of legend and lore about the menace and majesty of dragons, which have breathed fire into our imaginations from ancient Rome to Game of Thrones.

“I love the way Scott Bruce has scoured so much ancient lore to bring us this treasury of dragon-related information, and I shall turn to it frequently.”—Philip Pullman, #1 New York Times bestselling author of The Golden Compass

“A guide to the fantastic beasts and where to find them in the world’s mythological and literary traditions . . . Scott Bruce knows a thing or two about what scares us.”—Atlas Obscura 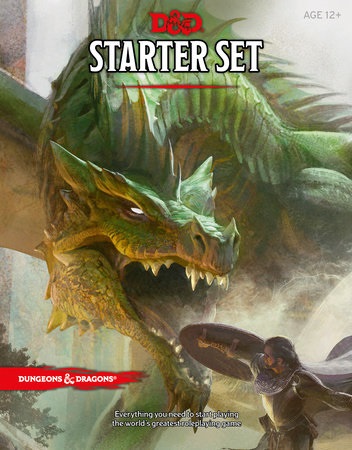 Everything you need to start playing the world’s greatest roleplaying game.

The Dungeons & Dragons Starter Set is your gateway to action-packed stories of the imagination. This box contains the essential rules of the game plus everything you need to play heroic characters on perilous adventures in worlds of fantasy. Explore subterranean labyrinths! Plunder hoards of treasure! Battle legendary monsters! 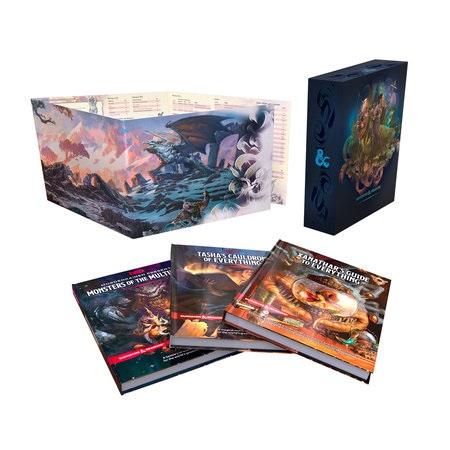 Embark on a journey with the rival wizards Tasha and Mordenkainen and the crime lord Xanathar. Learn new secrets and discover magical new ways to play the world’s greatest roleplaying game. The perfect set for Players and Dungeon Masters looking to expand their game with additional rules and character options.