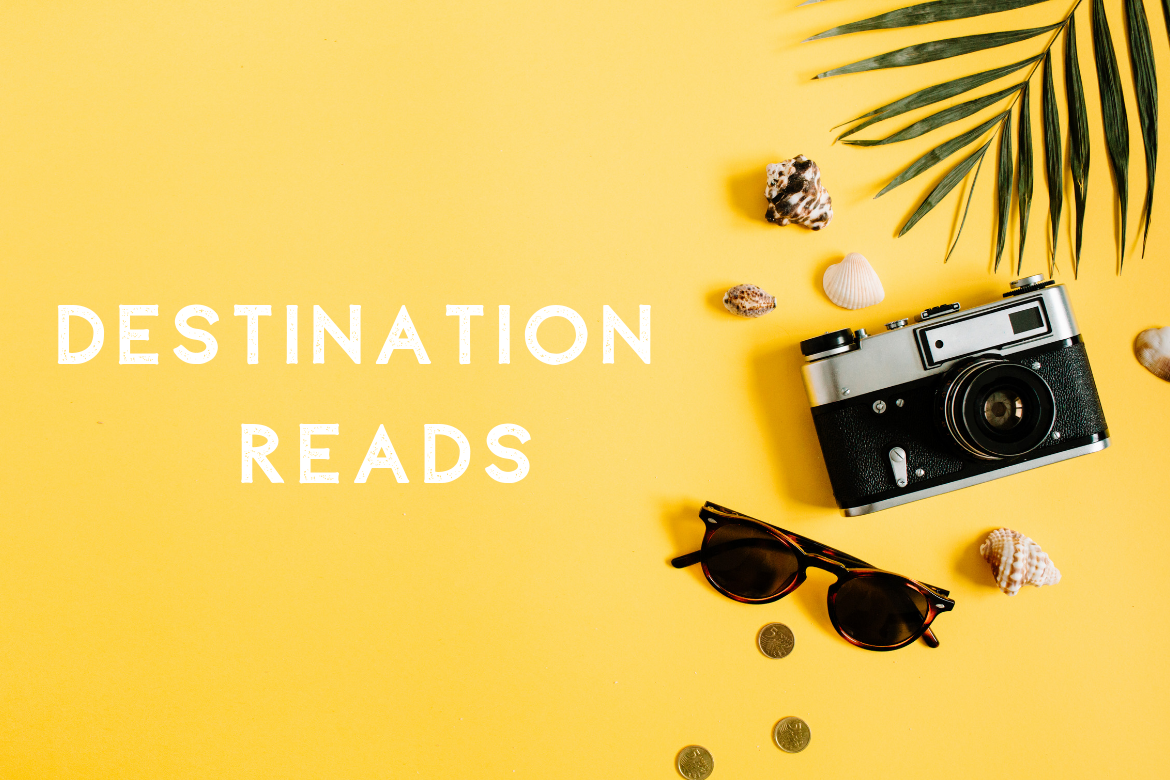 Take a last-minute vacation with these destination reads.

If You’re Jetting Off to Paris, Don’t Forget: 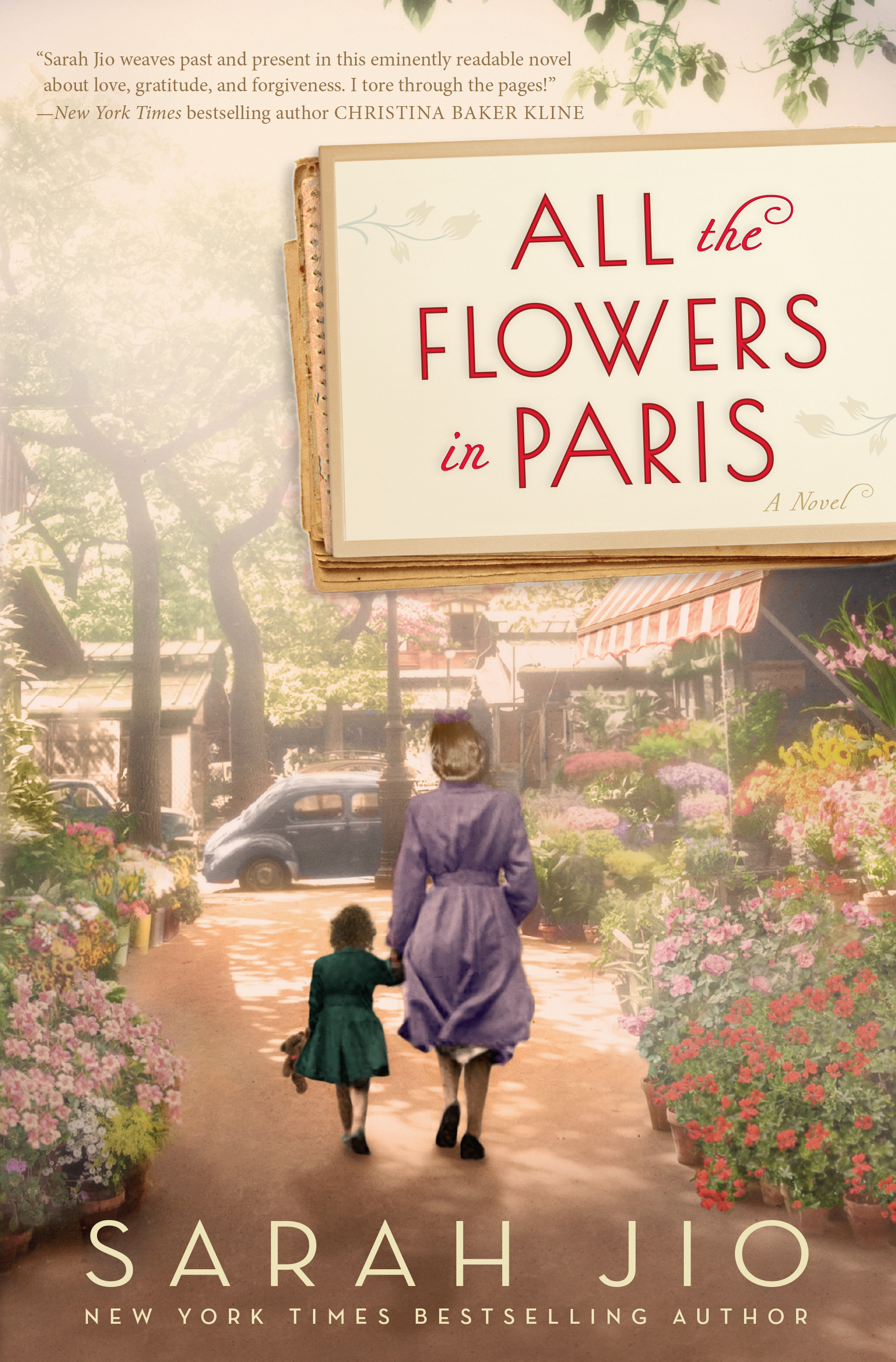 All the Flowers in Paris by Sarah Jio

Two women are connected across time by the city of Paris, a mysterious stack of love letters, and shocking secrets sweeping from World War II to the present.

When Caroline wakes up in a Paris hospital with no memory of her past, she’s confused to learn that for years she’s lived a sad, reclusive life in a sprawling apartment on the rue Cler. Slowly regaining vague memories of a man and a young child, she vows to piece her life back together—though she can’t help but feel she may be in danger. A budding friendship with the chef of a charming nearby restaurant takes her mind off her foggy past, as does a startling mystery from decades prior.

In Nazi-occupied Paris, a young widow named Céline is trying to build a new life for her daughter while working in her father’s flower shop and hoping to find love again. Then a ruthless German officer discovers her Jewish ancestry and Céline is forced to play a dangerous game to secure the safety of her loved ones. When her worst fears come true, she must fight back in order to save the person she loves most: her daughter.

When Caroline discovers Céline’s letters tucked away in a closet, she realizes that her apartment harbors dark secrets—and that she may have more in common with Céline than she could have ever imagined.

If You’re Headed for a Refreshing Trip to the Midwest, Don’t Forget: 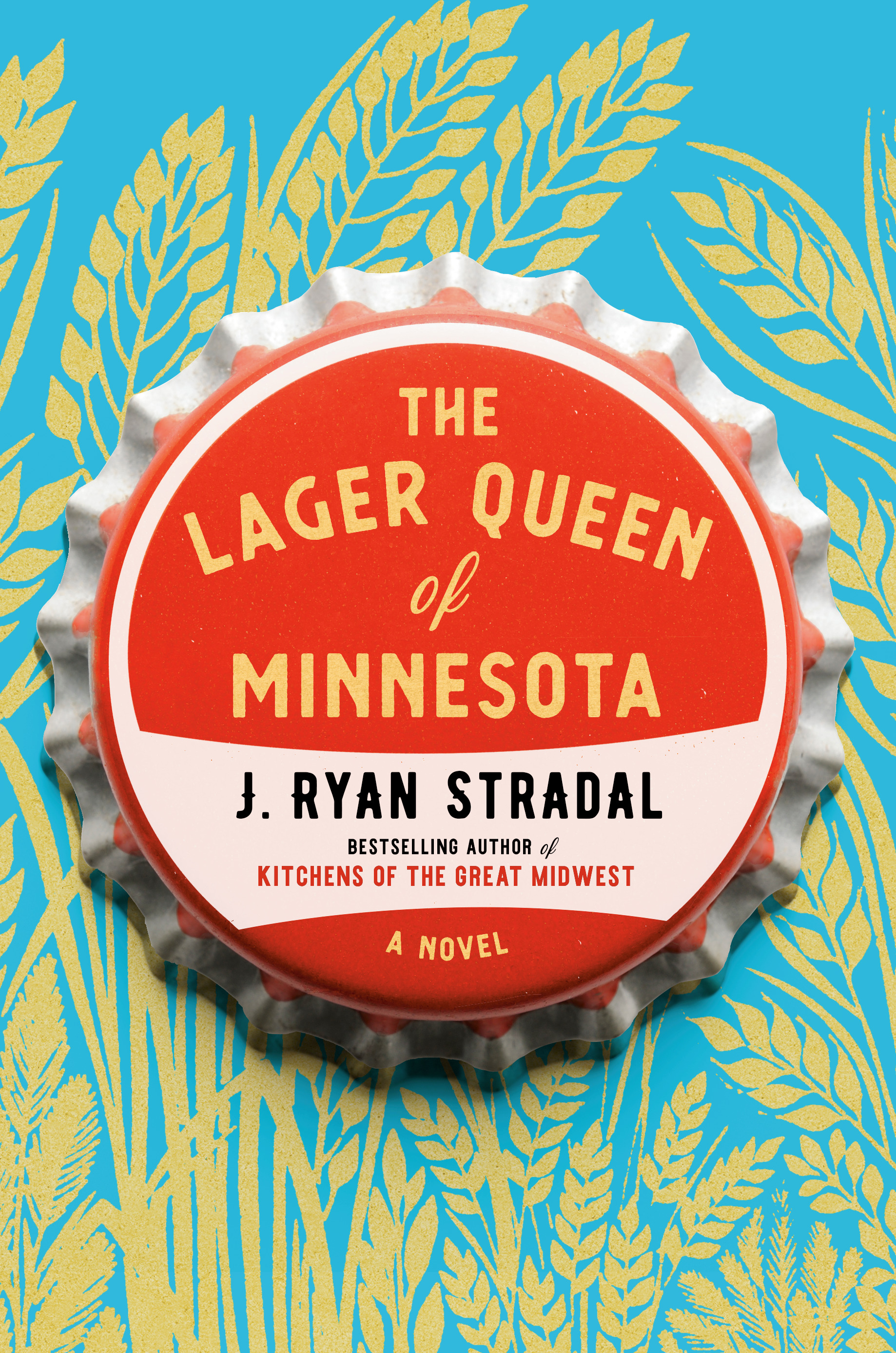 The Lager Queen of Minnesota by J. Ryan Stradal

A novel of family, Midwestern values, hard work, fate and the secrets of making a world-class beer, from the bestselling author of Kitchens of the Great Midwest.

Two sisters, one farm. A family is split when their father leaves their shared inheritance entirely to Helen, his younger daughter. Despite baking award-winning pies at the local nursing home, her older sister, Edith, struggles to make what most people would call a living. So she can’t help wondering what her life would have been like with even a portion of the farm money her sister kept for herself.

With the proceeds from the farm, Helen builds one of the most successful light breweries in the country, and makes their company motto ubiquitous: “Drink lots. It’s Blotz.” Where Edith has a heart as big as Minnesota, Helen’s is as rigid as a steel keg. Yet one day, Helen will find she needs some help herself, and she could find a potential savior close to home . . . if it’s not too late.

Meanwhile, Edith’s granddaughter, Diana, grows up knowing that the real world requires a tougher constitution than her grandmother possesses. She earns a shot at learning the IPA business from the ground up–will that change their fortunes forever, and perhaps reunite her splintered family?

For an Unforgettable Family Vacation to the Gulf, Don’t Forget: 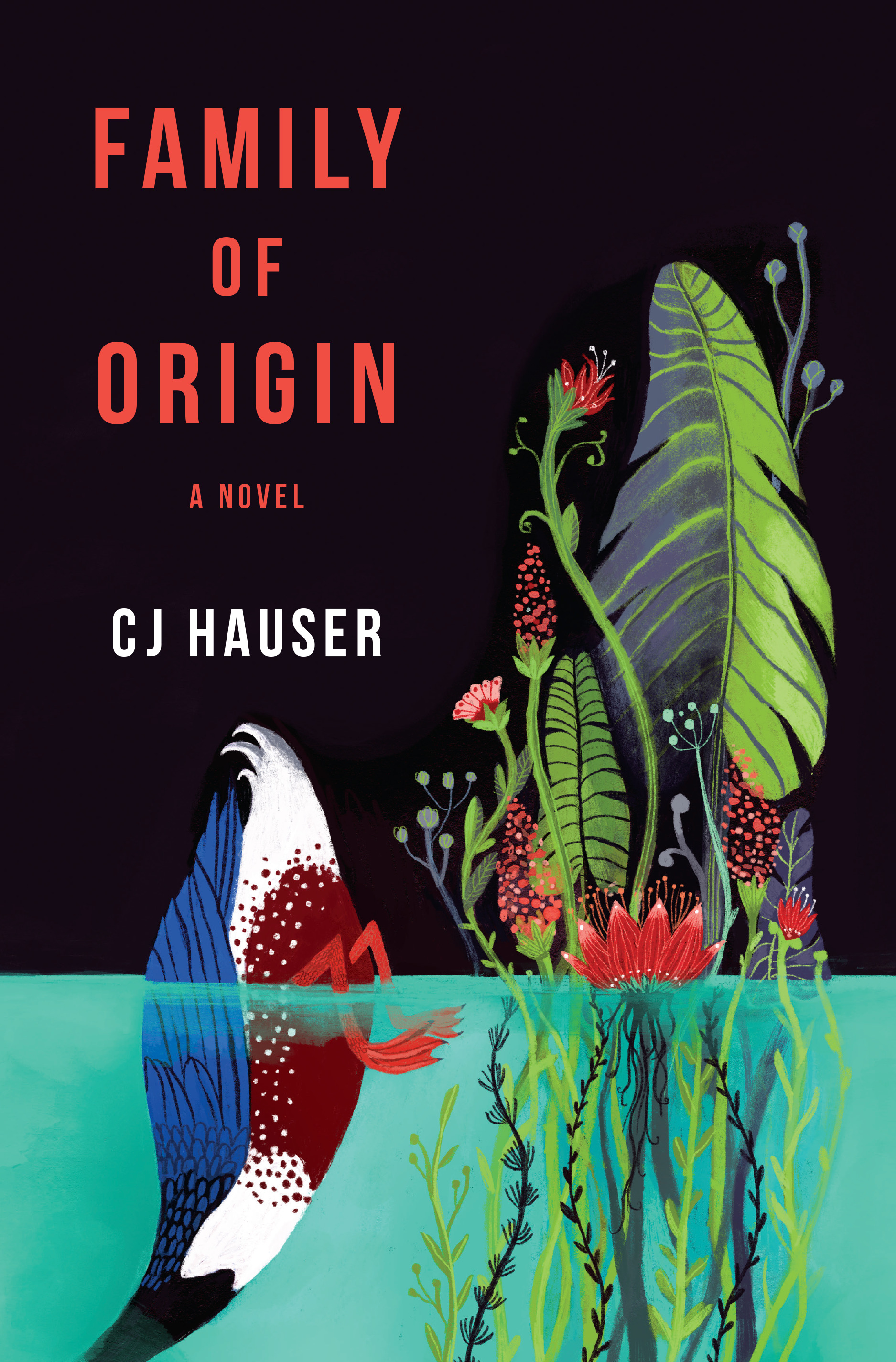 Family of Origin by CJ Hauser

Delightfully funny, fiercely original, high-spirited and warm, Family of Origin grapples with questions of nature and nurture, evolution and mating, intimacy and betrayal, progress and forgiveness.

When Nolan Grey receives news that his father, a once-prominent biologist, has drowned off Leap’s Island, he calls on Elsa, his estranged, older half-sister, to help pick up the pieces. This, despite the fact that it was he and Elsa who broke the family in the first place. The Greys have been avoiding each other for a dozen years.

Elsa and Nolan travel to their father’s field station, a wild and isolated spot off the Gulf Coast. Here, their father’s fatalistic colleagues, the Reversalists, obsessively study the undowny bufflehead, a rare sea duck whose loss of waterproof feathers proves, they say, that evolution is running in reverse and humanity’s best days are behind us.

On an island that is always looking backward, it’s impossible for the siblings to ignore their past. Stuck together in the close quarters of their island stilt-house, and provoked by the absurd antics of the remaining Reversalists, years of family secrecy and blame between Elsa and Nolan threaten to ruin them all over again. As the Greys urgently trek the island to find the so-called Paradise Duck, their father’s final obsession, they begin to fear that they were their father’s first evidence that the future held no hope.

If You’re Bound for the Nation’s Capitol, Don’t Forget: 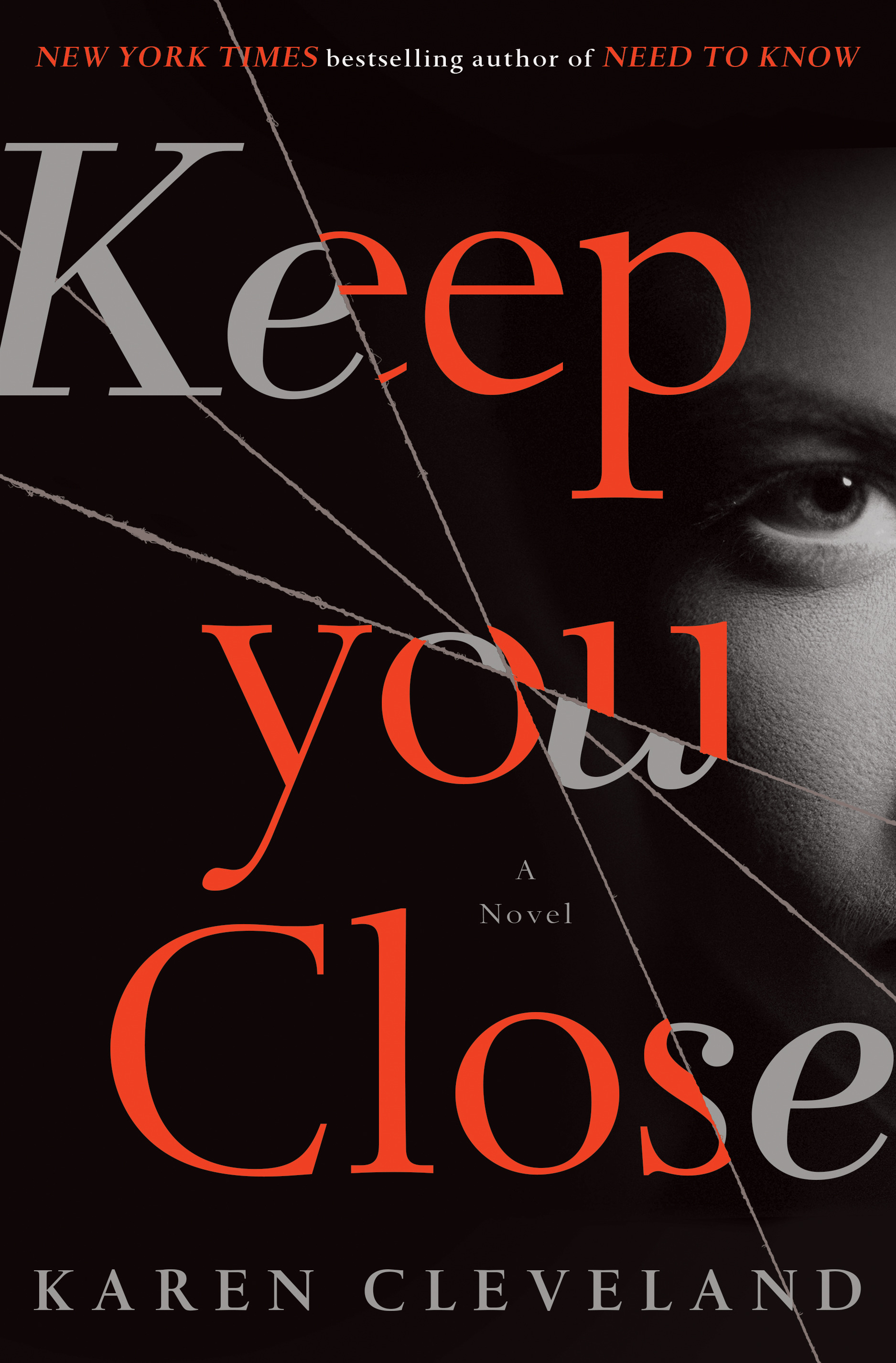 Keep You Close by Karen Cleveland

A woman must confront her sense of right and wrong when the one person she loves most is accused of an unimaginable crime. From the New York Times bestselling author of Need to Know.

Stephanie Maddox works her dream job policing power and exposing corruption within the FBI. Getting here has taken her nearly two decades of hard work, laser focus, and personal sacrifices—the most important, she fears, being a close relationship with her teenage son, Zachary. A single parent, Steph’s missed a lot of school events, birthdays, and vacations with her boy—but the truth is, she would move heaven and earth for him, including protecting him from an explosive secret in her past. It just never occurred to her that Zachary would keep secrets of his own.

One day while straightening her son’s room, Steph is shaken to discover a gun hidden in his closet. A loaded gun. Then comes a knock at her front door—a colleague on the domestic terrorism squad, who utters three devastating words: “It’s about Zachary.”

So begins a compulsively readable thriller of deception and betrayal, as Stephanie fights to clear her son’s name, only to expose a shadowy conspiracy that threatens to destroy them both—and bring a country to its knees.

If You’re Taking a Trip to the Land of Love and Gelato, Don’t Forget: 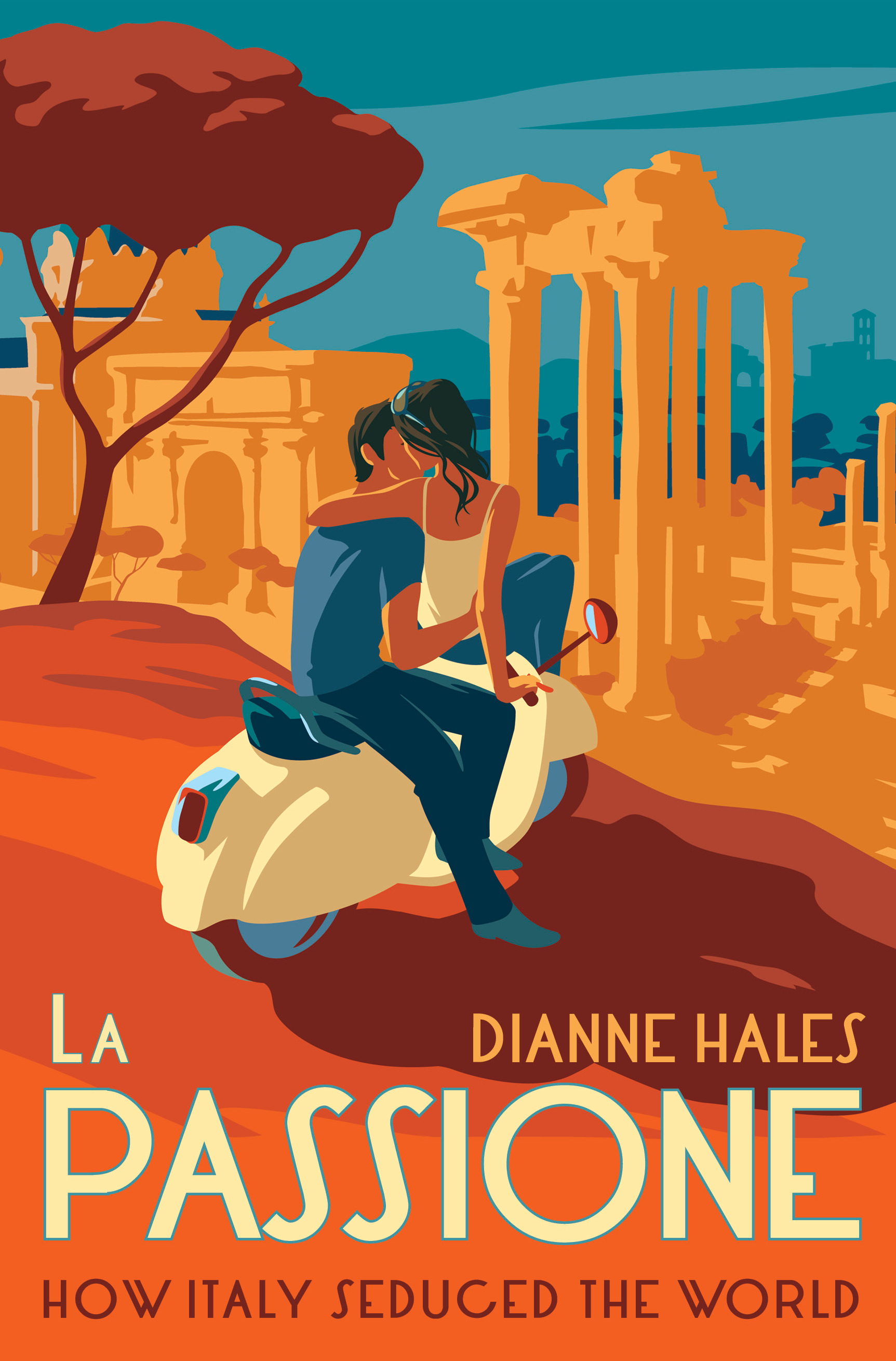 La Passione: How Italy Seduced the World by Dianne Hales

A charming narrative and “pop historical” look into how Italy has shaped the Western world’s most vibrant passions, from literature to love, music to art, and food to wine.

Can you imagine painting without Leonardo, opera without Verdi, fashion without Armani, food without the signature tastes of pasta, gelato, and pizza? The first universities, first banks, first public libraries? All Italian.

New York Times bestselling author Dianne Hales attributes these landmark achievements to la passione italiana, a primal force that stems from an insatiable hunger to discover and create; to love and live with every fiber of one’s being. This fierce drive, millennia in the making, blazes to life in the Sistine Chapel, surges through a Puccini aria, deepens a vintage Brunello, and rumbles in a gleaming Ferrari engine.

Our ideal tour guide, Hales sweeps readers along on her adventurous quest for the secrets of la passione. She swims in the playgrounds of mythic gods, shadows artisanal makers of chocolate and cheese, joins in Sicily’s Holy Week traditions, celebrates a neighborhood Carnevale in Venice, and explores pagan temples, vineyards, silk mills, movie sets, crafts studios, and fashion salons. She introduces us, through sumptuous prose, to unforgettable Italians, historical and contemporary, all brimming with the greatest of Italian passions—for life itself.

For a Relaxing Getaway at the Beach, Don’t Forget: A Wedding on the Beach by Holly Chamberlain

A summer wedding, a college reunion, a gorgeous Maine beach house—it’s the ideal setting for bestselling author Holly Chamberlin’s captivating novel about the connections that shape us, sometimes break our hearts, and forever change our lives.

Bess Culpepper has long been sure of two things—that her group of college friends would stay close, and that love is worth the wait. At forty-two, she’s found the right man, and she’s celebrating her upcoming wedding by inviting her best friends to beautiful Kennebunkport.

Bess has always been at the helm of these reunions, herding everyone together despite distance and outside commitments. As usual, Marta and Mike journey from their home near New York City, while Chuck and his husband, Dean, travel from Los Angeles. But Allison, half of a devoted couple since college, is making the trip from Chicago without her husband, Chris. None of the others knows the reason for their impending divorce. There are other tensions too. The usually level-headed Marta is conspicuously on edge, and Chuck reveals devastating personal news.

As reality encroaches on her dreams of the perfect gathering, Bess begins to second guess her assumptions about friendship and fidelity. If relationships like these, nurtured over decades, can flounder, how can any couple stay committed? Is it possible to truly know the ones we love—or even to predict where one’s own path will lead?

Once Upon a Time in Hollywood Reads