There’s a Book for That: Asian Pacific American Heritage Month 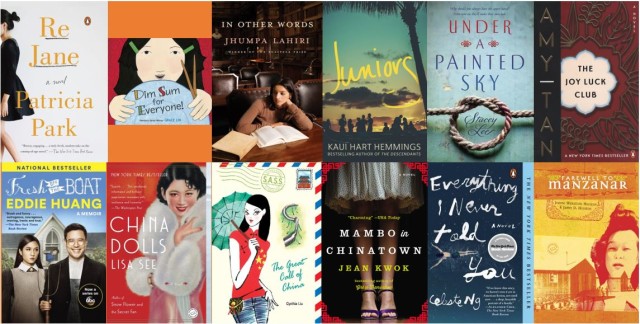 Since 1990, during the month of May, America has celebrated the historic and cultural contributions of Asian Americans and Pacific Islanders to our society. In honor of this special month, we’ve compiled a list of books that represent authentic Asian Pacific American voices on merging cultures, identity questions, discrimination, language barriers, religion, history, family, education, and the future. Learn more about Asian Pacific American Heritage Month by visiting the official website.

Everything I Never Told You by Celeste Ng

A haunting debut novel about a mixed-race family living in 1970s Ohio, and what happens when their favorite daughter is found drowned at the bottom of a lake near their home.

Re Jane by Patricia Park

Journeying from Queens to Brooklyn to Seoul, and back, this is a fresh, contemporary retelling of Jane Eyre and a poignant Korean American debut.

In Other Words by Jhumpa Lahiri

Presented in a dual-language format, this is a wholly original book about exile, linguistic and otherwise, written with an intensity and clarity not seen since Vladimir Nabokov: a startling act of self-reflection and a provocative exploration of belonging and reinvention.

Mambo in Chinatown by Jean Kwok

From the bestselling author of Girl in Translation, an inspiring novel about a young woman torn between her family duties in Chinatown and her escape into a more Western world.

Fresh Off the Boat by Eddie Huang

Now a hit series on ABC, this is the story of a Chinese-American kid trying to find himself ten thousand miles from his legacy and anchored only by his conflicted love for his family, hip hop culture, and his passion for food.

In 1938, three women from very different Asian backgrounds meet by chance, quickly becoming best friends. They are inseparable until a surprise attack on Pearl Harbor when secrets are exposed and betrayal changes everything.

Chinese-born Cece was adopted by American parents. Eager to explore her roots, she jumps at the chance to attend the S.A.S.S. program in Xi’an, China. But when she arrives, she receives quite a culture shock. And the closer she comes to finding out about her birth parents, the more apprehensive she gets.

Part Hawaiian, part Mainlander, Lea Lane has lived in between all her life. But it isn’t until junior year that she learns how to do it on her own terms.

Jeanne Wakatsuki was seven years old in 1942 when her family was uprooted from their home and sent to live at Manzanar internment camp–with 10,000 other Japanese Americans. Farewell to Manzanar is the true story of one spirited Japanese-American family’s attempt to survive the indignities of forced detention.

Dim Sum for Everyone! by Grace Lin

A Chinese American family sits down to enjoy a traditional dim sum meal. Dumplings, cakes, buns, and tarts are wheeled out in little dishes on trolleys, and each family member gets to choose a favorite treat! Includes an informative author’s note for parents, teachers, and children who want to learn more about the origins and practice of dim sum.

Under a Painted Sky by Stacey Lee

Everything You Need to Know About #Readathon 2016 for Tomorrow