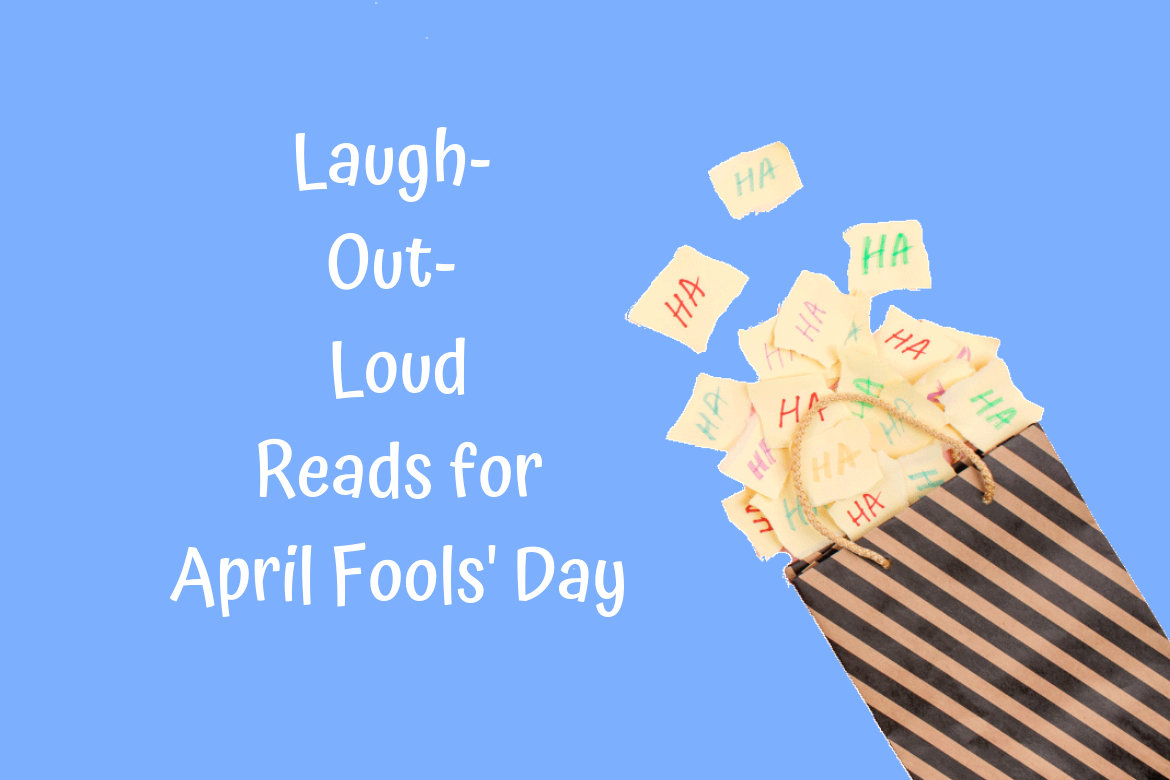 It’s the start of April and, unfortunately, there are no books we have to recommend this month.

April Fools’!
Get into the spirit with these fun, laugh-out-loud reads.

Take My Advice, I Don’t Use It Anyway: 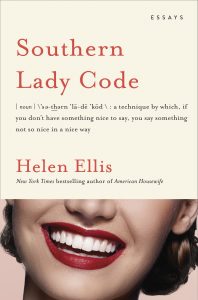 The bestselling author of American Housewife is back with a fiercely funny collection of essays on marriage and manners, thank-you notes and three-ways, ghosts, gunshots, gynecology, and the Calgon-scented, onion-dipped, monogrammed art of living as a Southern Lady.

Helen Ellis has a mantra: “If you don’t have something nice to say, say something not-so-nice in a nice way.” Say “weathered” instead of “she looks like a cake left out in the rain.” Say “early-developed” instead of “brace face and B cups.”

In these twenty-three raucous essays Ellis transforms herself into a dominatrix Donna Reed to save her marriage, inadvertently steals a $795 Burberry trench coat, witnesses a man fake his own death at a party, avoids a neck lift, and finds a black-tie gown that gives her the confidence of a drag queen. While she may have left her home in Alabama, married a New Yorker, forgotten how to drive, and abandoned the puffy headbands of her youth, Helen Ellis is clinging to her Southern accent like mayonnaise to white bread, and offering readers a hilarious, completely singular view on womanhood for both sides of the Mason-Dixon. 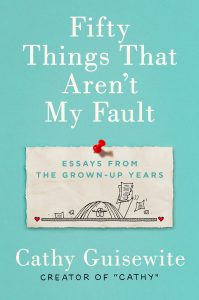 Fifty Things That Aren’t My Fault: Essays from the Grown-Up Years by Cathy Guisewite

From the creator of the iconic “Cathy” comic strip comes her first collection of funny, wise, poignant, and incredibly honest essays about being a woman in what she lovingly calls “the panini generation.”

As the creator of “Cathy,” Cathy Guisewite found her way into the hearts of readers more than forty years ago, and has been there ever since. Her hilarious and deeply relatable look at the challenges of womanhood in a changing world became a cultural touchstone for women everywhere. Now Guisewite returns with her signature wit and warmth in this debut essay collection about another time of big transition, when everything starts changing and disappearing without permission: aging parents, aging children, aging self stuck in the middle.

With her uniquely wry and funny admissions and insights, Guisewite unearths the humor and horror of everything from the mundane (trying to introduce her parents to TiVo and facing four decades’ worth of unorganized photos) to the profound (finding a purpose post-retirement, helping parents downsize their lives, and declaring freedom from all those things that hold us back). 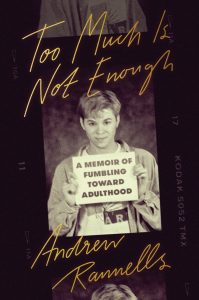 Too Much is Not Enough: A Memoir of Fumbling Toward Adulthood by Andrew Rannells

From the star of Broadway’s The Book of Mormon and HBO’s Girls, the heartfelt and hilarious coming-of-age memoir of a Midwestern boy surviving bad auditions, bad relationships, and some really bad highlights as he chases his dreams in New York City.

In Too Much Is Not Enough, Rannells takes us on the journey of a twentysomething hungry to experience everything New York has to offer: new friends, wild nights, great art, standing ovations. At the heart of his hunger lies a powerful drive to reconcile the boy he was when he left Omaha with the man he desperately wants to be.

As Rannells fumbles his way towards the Great White Way, he also shares the drama of failed auditions and behind-the-curtain romances, the heartbreak of losing his father at the height of his struggle, and the exhilaration of making his Broadway debut in Hairspray at the age of twenty-six. Along the way, he learns that you never really leave your past—or your family—behind; that the most painful, and perversely motivating, jobs are the ones you almost get; and that sometimes the most memorable nights with friends are marked not by the trendy club you danced at but by the recap over diner food afterward. 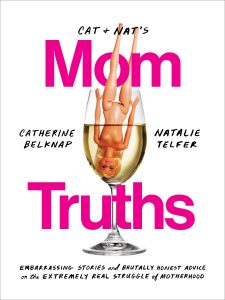 Hilarious best friends Cat and Nat created a massive online community of moms by sharing their ultra-real and just a bit R-rated dispatches from the mom trenches. From what not to eat a few days after giving birth (chicken wings) to the most effective ways to dodge post-partum sex, Cat & Nat’s Mom Truths shares everything no one will tell you about having kids.

Mixing memoir, humor, and advice, Cat and Nat tell never-before-told stories about the stress, guilt, joy, and laundry (oh the laundry!) of being a mom. With seven kids between them, they get real about the parts of parenting that somehow don’t make their Instagram feed.

Sharing their outrageous humor, fearless myth-busting, and genuine comfort on every page, they walk you from pregnancy to the toddler years and beyond. And they dole out ridiculously honest advice, like what you think you need at the hospital when you have your first baby (lip gloss) versus what you actually need (hemorrhoid pillow), and how worried you should really be about germs (less than you are). 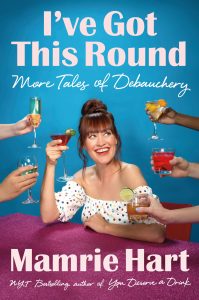 I’ve Got This Round: More Tales of Debauchery by Mamrie Hart

Hilarious, candid, and full of shenanigans: actress and comedian Mamrie Hart—the New York Times bestselling author of You Deserve a Drink—is back with more adventures.

When Mamrie simultaneously enters her thirties and finds herself single for the first time since college, the world is suddenly full of possibilities. Emboldened by the cool confidence that comes with the end of one’s twenties, plus the newfound independence of an attachment-free lifestyle, Mamrie commits herself to living life with even more spirit, adventure, and heart than before. Mamrie dives into new experiences at full tilt and seeks out once-in-a-lifetime opportunities (like meeting the Dixie Chicks), bucket-list goals (like visiting the Moulin Rouge), and madcap adventures (like going anchors-away on a Backstreet Boys cruise)—all while diving back into the dating world for the first time in a decade. 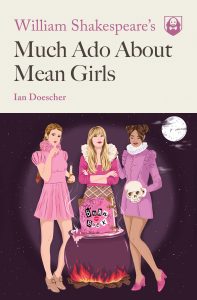 Williams Shakespeare’s Much Ado About Mean Girls by Ian Doescher

Bestselling author Ian Doescher brings his signature Shakespearean wordsmithing to this cult classic beloved by generations of teen girls and other fans.

Power struggles. Bitter rivalries. Jealousy. Betrayals. Star-crossed lovers. When you consider all these plot points, it’s pretty surprising William Shakespeare didn’t write Mean Girls. But now fans can treat themselves to the epic drama—and heroic hilarity—of the classic teen comedy rendered with the wit, flair, and iambic pentameter of the Bard. Our heroine Cady disguises herself to infiltrate the conniving Plastics, falls for off-limits Aaron, struggles with her allegiance to newfound friends Damian and Janis, and stirs up age-old vendettas among the factions of her high school. 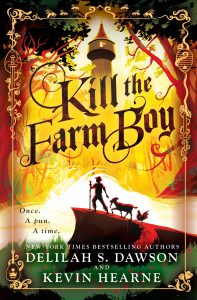 Kill the Farm Boy: The Tales of Pell by Kevin Hearne and Delilah S. Dawson

Once upon a time, in a faraway kingdom, a hero, the Chosen One, was born . . . and so begins every fairy tale ever told.

This is not that fairy tale.

There is a Chosen One, but he is unlike any One who has ever been Chosened.

And there is a faraway kingdom, but you have never been to a magical world quite like the land of Pell.

There, a plucky farm boy will find more than he’s bargained for on his quest to awaken the sleeping princess in her cursed tower. First there’s the Dark Lord, who wishes for the boy’s untimely death . . . and also very fine cheese. Then there’s a bard without a song in her heart but with a very adorable and fuzzy tail, an assassin who fears not the night but is terrified of chickens, and a mighty fighter more frightened of her sword than of her chain-mail bikini. This journey will lead to sinister umlauts, a trash-talking goat, the Dread Necromancer Steve, and a strange and wondrous journey to the most peculiar “happily ever after” that ever once-upon-a-timed.

Be Sure to Check out No Country for Old Gnomes—the Second Book in The Tales of Pell Series—hitting library shelves on April 16th!