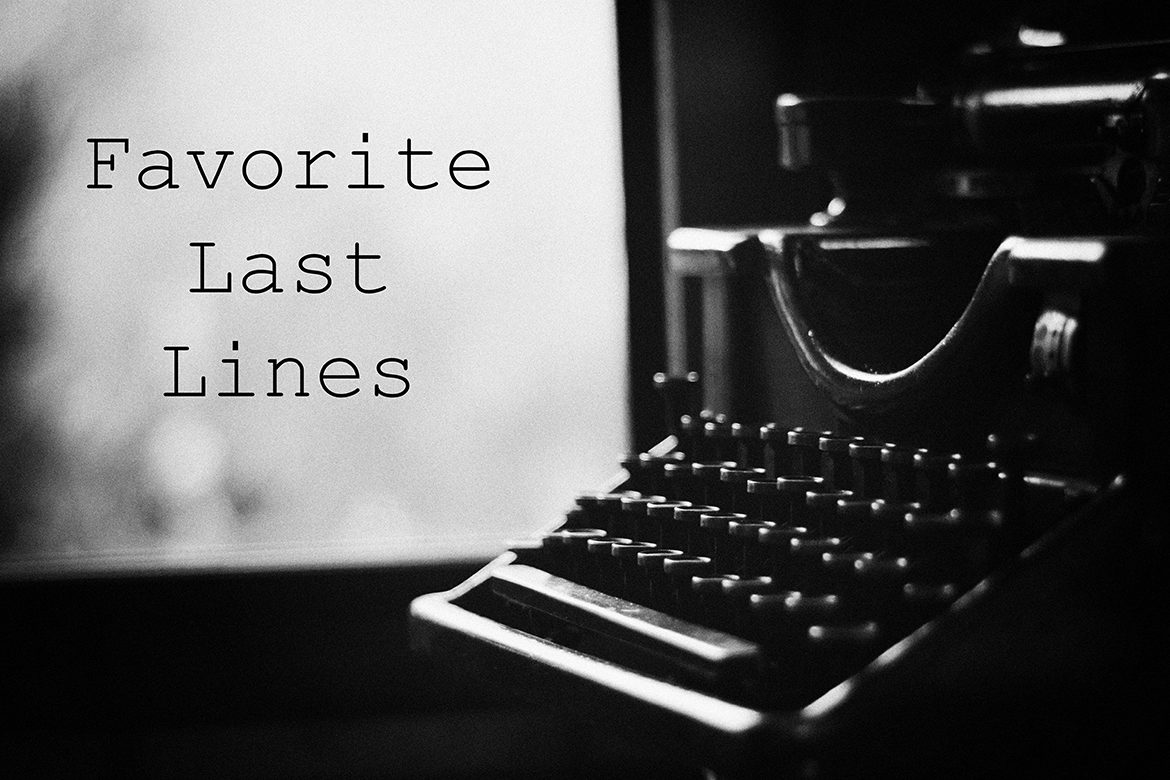 It is a truth universally acknowledged, that a single man in possession of a good fortune,
must be in want of a wife.
It was inevitable: the scent of bitter almonds always reminded him of the fate of unrequited love.
Call me Ishmael.

The right opening line can make the hairs on the back of your head stand up. They are quoted, stitched into samplers, made into posters. Immortal.

Just as bewitching though, is the right last line. If the opener entices us, and gives us a sense of the bounty to come, then the closer is the final thought that will linger, long after you close the book. Many are strong enough to make us turn right back to page one, then and there. Here are 20 of our favorite last lines in literature. We hope they beckon you as they do us.

My Antonia by Willa Cather
“Whatever we had missed, we possessed together the precious, the incommunicable past.”

White Noise by Don Delillo
“Everything we need that is not food or love is here in the tabloid racks. The tales of the supernatural and the extraterrestrial. The miracle vitamins, the cures for cancer, the remedies for obesity. The cults of the famous and the dead.”

Atonement by Ian McEwan
“But now I must sleep.”

The Book Thief by Markus Zusak
“LAST NOTE FROM YOUR NARRATOR. I am haunted by humans”

On The Road by Jack Kerouac
“So in America when the sun goes down and I sit on the old broken-down river pier watching the long, long skies over New Jersey and sense all that raw land that rolls in one unbelievable huge bulge over to the West Coast, and all that road going, all the people dreaming in the immensity of it, and in Iowa I know by now the children must be crying in the land where they let the children cry, and tonight the stars will be out, and don’t you know that God is Pooh Bear? The evening star must be drooping and shedding her sparkler dims on the prairie, which is just before the coming of complete night that blesses the earth, darkens all rivers, cups the peaks and folds the final shore in, and nobody, nobody knows what’s going to happen to anybody besides the forlorn rags of growing old, I think of Dean Moriarty, I even think of Old Dean Moriarty the father we never found, I think of Dean Moriarty.”

A Visit from the Good Squad by Jennifer Egan
“A sound of clicking heels on the pavement punctured the quiet. Alex snapped open his eyes, and he and Bennie both turned-whirled, really, peering for Sasha in the ashy dark. But it was another girl, young and new to the city, fiddling with her keys.”

C by Tom McCarthy
“The wake itself remains, etched out across the water’s surface; then it fades as well, although no one is there to see it go”

Candide by Voltaire
“’Excellently observed,’ answered Candide; ‘but we must cultivate our garden.’”

The Wind-Up Bird Chronicle by Haruki Murakami
“In a place far away from anyone or anywhere, I drifted off for a moment.”

The Handmaid’s Tale by Margaret Atwood
“Are there any questions?”

The Awakening by Kate Chopin
“There was the hum of bees, and the musky odor of pinks filled the air.

Ulysses by James Joyce
“I was a Flower of the mountain yes when I put the rose in my hair like the Andalusian girls used or shall I wear a red yes and how he kissed me under the Moorish wall and I thought well as well him as another… then he asked me would I yes to say yes my mountain flower and first I put my arms around him yes and drew him down to me so he could feel my breasts all perfume yes and his heart was going like mad and yes I said yes I will Yes.”

Invisible Man by Ralph Ellison
“Who knows but on the lower frequencies, may I speak for you?”

Peter Pan by J.M. Barrie
“When Margaret grows up she will have a daughter, who is to be Peter’s mother in turn; and thus it will go on, so long as children are gay and innocent and heartless.”

Lolita by Vladimir Nabokov
“I am thinking of aurochs and angels, the secret of durable pigments, prophetic sonnets, the refuge of art. And this is the only immortality you and I may share, my Lolita.”

Middlemarch by George Eliot
“But the effect of her being on those around her was incalculably diffusive: for the growing good of the world is partly dependent on unhistoric acts; and that things are not so ill with you and me as they might have been is half owing to the number who lived faithfully a hidden life, and rest in unvisited tombs.”

The Adventures of Huckleberry Finn by Mark Twain
“But I reckon I got to light out for the Territory ahead of the rest, because Aunt Sally she’s going to adopt me and sivilize me and I can’t stand it. I been there before.”

To the Lighthouse by Virginia Woolf
“Yes, she thought, laying down her brush in extreme fatigue, I have had my vision.”

Reader’s Guides for Your Book Club